Monday, May 10
You are at:Home»Columns»Nature Matters»Mulu’s fantastical and fascinating features 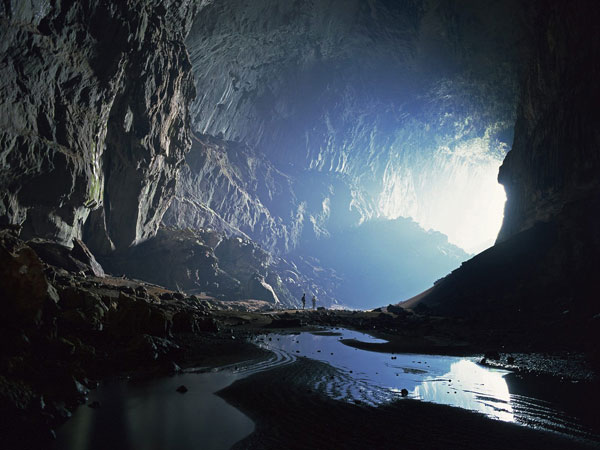 LIMESTONE landscapes or karst scenery have fascinated me throughout my life probably because, as a boy, I was used to seeing greyish granitic moorlands in West Cornwall in the United Kingdom. My first exposure to limestone scenery was on a school geography-geology field trip to the Mendip Hills in Somerset (now only 60km from my home) to view a gorge, bare rock faces and visit a cave system.

Subsequently, I have visited this Carboniferous limestone hill mass on many occasions with my students to study Cheddar Gorge, Wookey Hole caves and the views beyond, over the lowlands of Somerset, from the plateau areas high above.

At Oxford University, I had the great privilege of attending a weekly tutorial given by one the world’s experts in karst (limestone) geomorphology Dr Marjorie Sweeting. Sitting on the floor of her study, I pored over maps of her native Yorkshire’s temperate limestone scenery and she enthusiastically recalled her most recent research into tropical limestone features in Cuba.

Little did I know then that, 10 years later, well into her 60s, Marjorie Sweeting would be a leading scientist on a Royal Geographical Expedition (RGS) to explore the Mulu massif. That scientific expedition, for 15 months in 1977 to 1978, led by Robin Hanbury-Tenison and consisting of 120 scientists from all over the world and of various disciplines – professional mountaineers, botanists, ecologists, geomorphologists, hydrologists, speleologists and zoologists – with their findings focussed the wider world on the glorious gems of a ‘little known’ area of Borneo.

‘Little known’ does not do the Penan, Berawan and Murut people full justice for they had lived in this area for centuries. Without their expertise and guidance, this expedition would never have been brought to the eyes of the world. Subsequently Mulu has never looked back, yet its cultural and geological histories are firmly rooted in the past.

Such world acclaimed heritage sites are defined as: “Our legacy from the past, what we live with today, and what we pass on to future generations.”

What constitutes qualification for such a prestigious accolade? In Mulu’s case it obviously fulfilled the required four criteria: 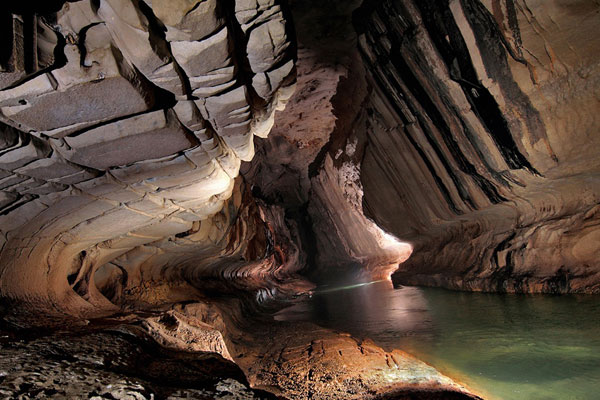 A river runs through Clearwater Cave, which is 30 metres high and 20 metres wide.

From a geomorphological viewpoint, the structure of the limestone at Mulu is not very much different from those I have studied all over the United Kingdom and in Western and Central Europe, in that these are classed as massive limestone, meaning lithologically that they contain impurities with up to 90 per cent calcium carbonate content.

Their structural properties are similar in that they are characterised by definite vertical cracks (joints) and horizontal bedding planes, thus allowing rainwater to pass downwards and move through these permeable rocks until the water reaches an impermeable rock below and re-emerges as a surface river.

The European limestones experienced the Pleistocene glaciations (1.4 million years to 10,000 years before the present) before meltwater created many of the landforms found in today’s temperate climate.

Apart from glacial evidence on Mount Kinabalu’s granite landscape, there is no known evidence of glaciation affecting Mulu, although there are suspicions that there could have been considerable changes of rainfall in this area during this cold period of geological history.

Mulu experiences between 4,000 and 7,000 millimetres of rain each year, in mean annual temperatures of over 25 degrees Celsius.

The Mulu limestone complex is the best studied karst area in the tropical world. Under Van’t Hoff’s Rule, for every 10 degrees Celsius rise in temperature, the rate of chemical solution doubles and thus has significantly led to the sculpturing of Mulu’s almost unique limestone landscape.

Whilst Gunung Mulu, composed of impermeable sandstones and shales, stands boldly at 2,377 metres and is the highest point in the national park, Mount Api at 1,682 metres is composed of massive limestone.

Mount Api’s karst pinnacles now feature in nearly every geomorphological textbook in the world and are seen as fluted and fretted limestone features up to 30 metres tall — almost tooth-like rocks arising majestically from the rainforested slopes below.

Such needle karst features must be related to a particular near-vertical upfold of the Melinau limestone, together with a heavy cross set concentration of joints and bedding planes during the uplift of these ocean deposits many moons ago, thus allowing water easy penetration between the limestone slabs.

The number and size of the Mulu Caves must rate this World Heritage Site as one of the top wonders of the most cavernous regions in the natural world.

Water flowing over the impermeable rocks of the Gunung Mulu massif has percolated downwards upon meeting the Melinau limestones to create such magnificent caverns.

Sarawak Chamber is the largest natural cave chamber in the world measuring 700 metres long, 415 metres wide, and 80 metres high – a space big enough to act as a hangar for 40 Boeing 747 aircraft.

The Melinau River passes through a limestone gorge about 3km north of Mount Api. Clearly there was once a giant cave there but through persistent erosion from above and below the cave roof collapsed.

Fortunately the aggressiveness of rainwater, in the form of carbonic acid, decreases as the water dissolves more calcium carbonate in its passage underground, so have no fears in trekking through the Mulu Caves during your visit. Rest assured no cavern roofs will collapse.

Enjoy the wonders of our natural world be they of personal, geological, botanical, zoological, or historical interests. Equally importantly is to be able to say later in life: “I have visited one of nature’s wonders of the world, here in my own state of Sarawak.”

It will be a most memorable adventure.

For further reading go to www.mulupark.com and www.unesco.org.

An article written by Robin Hanbury-Tenison at www.telegraph.co.uk makes truly excellent reading as he recalls his first involvement in setting up base camps for the RGS expedition to Mulu. 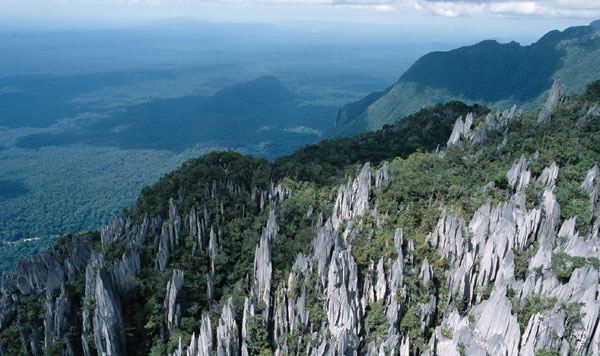