Monday, January 30
You are at:Home»Columns»How I See it»Preserving the sanctity of a community market
For the freshest news, join The Borneo Post's Telegram Channel and The Borneo Post on Newswav. 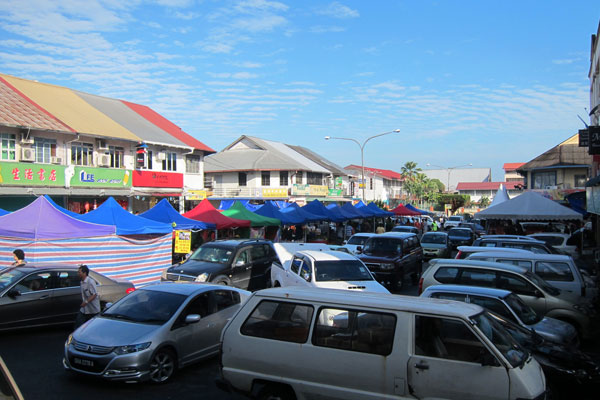 In congested Maong Bazaar you see a community market, a street and political will.

THE Maong Bazaar (Third Mile Old Market) is special – one of the heritage of the old Kuching.

I grew up at Maong Bazaar. Back then, Jalan Keretapi was just taking shape. No Golden Arch, no flyover, no heavy traffic.

Fresh are the memories of morning walks with my great grandmother at the huge park filled with trees bearing scented white flowers that gave us such refreshing scent of verve and energy at dawn and we would be the early birds to pick the best of groceries at Maong Bazaar.

All the shopowners and shoppers were my “uncles and aunties.” Greeting them loudly and cheerfully would always get me a free bag of fresh bean sprouts, leafy greens and, occasionally, one or two extra fish added to great grandma’s purchases.

Maong Bazaar was the heart and dear to families from Tai Shin Jar and Jalan Keretapi to Seng Goon Garden and Capital Garden. It was one great family.

A tragic fire, the demise of Roxy and the massive infrastructural progression around the vicinity did not transform the characters and traits of Maong Bazaar.

The Maong Bazaar family have only grown and transformed with time. The morning wet market is immensely popular. The hawker stalls, manned by pensioners operating from their car boots in the evening, have attracted sizeable customers and kept Maong Bazaar lively into the night. It is still one great family … until the arrival of Mr Alphard and Mr Big.

Alphard – its traditional name Alpha Hydrae meaning the solitary one – is the brightest star in the constellation Hydra, the largest of the 88 modern constellations, commonly represented as a water snake.

Alphard is, of course, a luxurious MPV named after the star. The elegant but burly outlook makes the solitary one a “tiger on the road.”

Our Mr Alphard is an enterprising hawker. The solitary one is hardly a Maong boy but his presence is pre-eminent. He deals with fruits – from durians, langsat to mandarin oranges.

When he opens his stall, it means adjoining huge tents, empty baskets surrounding the stall and his storeroom-vehicles over car parking spaces and the road, giving himself almost the floor space of a shop.

His successful enterprise includes wholesaling, so his stall is normally manned by his employees, brought and sent to Maong Bazaar in his Alphard.

Mr Big is also an enterprising businessman. He has been given a special temporary licence to occupy a huge section of the prime car parking spaces at Maong Bazaar to set up 13 tents for rental to hawkers.

Together with the mini market which has customarily put up enclosed tents and occupy six car parking spaces during this festive season, the busy Maong Bazaar, which is an island surrounded by heavy traffic, finds itself having to cope with the loss of at least 25 car parking spaces!

The shop owners, licensed hawkers in the market and regular shoppers at Maong Bazaar are furious. In the busy shopping hours, the cars are double-parked and triple-parked and this paralyzes the Bazaar and drives away shoppers.

Mr Alphard is privileged because a certain strong party man had muscled the Council into giving him the trading spaces in Maong Bazaar. The Council could not reject Mr Big because he had paid the same fees as Mr Alphard – RM5 per parking space per day for 10 days.

My offer to pay the same fee to clear up the parking spaces for shoppers was, however, disregarded.

The usual calm and affable communal bazaar is now wrecked by the offensive honking and angry curses of folks finding themselves trapped in the traffic chaos. The fuming pleas to the Council are, unfortunately, met with habitual apologies and sympathies.

Nothing personal against any particular local council. An elected local council will have the full mandate of the folk within its jurisdiction to institute good governance and administer with impartiality. Conversely, a politically appointed council loses its independence and impartiality as it holds allegiance to its masters.

The gentleman chairman and his enforcement officers have their hands tied as they watch in awe the roadside super stall stacked with hundreds of boxes of mandarin oranges.

Further, I am always amenable and supportive towards special festive markets, a commendable fixture that is customary of our plural society.

The additional festive stalls and markets in shopping malls and supermarkets are always rejoiced, and pleasurable to give shoppers the merry atmosphere and added choice of festive necessities.

The Kenyalang CNY market is one of such outstanding festive markets in the state with the potential to be developed as a tourist attraction to not only benefit the hawkers, traders and shoppers, but also generate income for the state.

Festive markets are successful because of their expediency and manageability. Naturally, there will be the extra shoppers and traffic to deal with.

A little inconvenience is always bearable – after all it is the festive season.

But the usual shoppers will be driven away if it becomes a hassle to find a parking space or it means braving the ruthless traffic to get to the island market.

Mr Alphard obviously does not think of others. With the backing of that former political secretary who can still cower the council, the busy Maong Bazaar is ideal for his super stall.

Do come to Maong Bazaar for your purchases from the shops, the stall holders at the wet market and from those hawkers who have been trading there for some time.

It is a hectic time but you will be met with the same cheerful Maong Bazaar folk who are always there to give you your money’s worth. It is still one of the best community market places.

But it is no place for selfish and inconsiderate entrepreneurs. As rationale consumers who love and frequent Maong Bazaar, maybe we should exercise our consumer rights and give the council a hand to drive out this solitary “tiger of the road.”

After all, mandarin oranges from China or Taiwan, they are available at any festive markets with the least variance in prices.

He will tell me that his mandarin oranges are the cheapest in town, and offer me a further discount. But I will rather buy from others, wouldn’t you?

Enjoy your shopping and wishing all a Happy Chinese New Year.

Previous ArticleWhich comes first – the chicken or the egg?
Next Article Patch-working the way to success