Sunday, May 9
You are at:Home»News»Sabah»Public request police to step up patrols 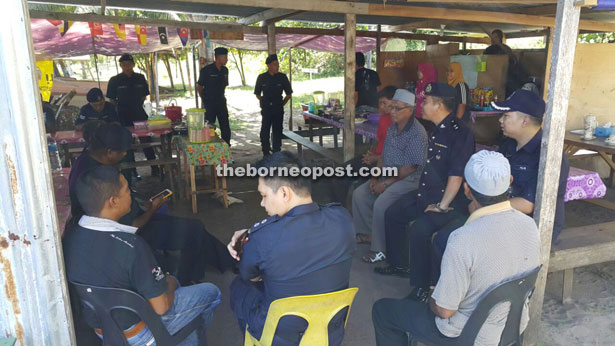 Police going to the ground to find out about issues faced by the people.

KOTA KINABALU: Concerned members of the public at Centre Point, Warisan Square, Karambunai Nexus Resort and Spa, Plaza Alamesra and Bornion Centre have requested the police to increase their patrols in order to enhance security in the areas.

City police chief ACP M Chandra said the requests were made during the high policing public engagement programme that was carried out on Saturday from 8pm to midnight.

The police had a meet-and-greet session at Centre Point and Warisan Square taxi station with 12 security guards and eight taxi drivers.

The security guards and taxi drivers raised the issue of traffic congestion and illegal parking in the area. They also requested the police to increase their patrols at Centre Point as many teenagers loitered in the building’s stairwells, while taxi drivers at Warisan Square hoped that parking lots for taxis could be provided for them as they were often summoned.

Similarly, a Karambunai Nexus Resort and Spa security officer suggested that the police increase their patrol near the hotel.

Meanwhile, members of the public voiced out the problem of students and strangers lingering at Alamesra during a meeting with the police at Plaza Alamesra, and they hoped that more police patrols could be carried out in the area.

The police also held a meeting with 30 residents in the hall at the Federal Flats in Likas where they enlightened the residents on security measures and self-defence rights.

Meanwhile, the Chinese community and night market hawkers at Bornion Centre in Luyang expressed their gratitude to the police for the distribution of house breaking prevention pamphlets by police personnel.

Businesses in the area also requested the police to step up their patrols in the last three days before Chinese New Year as there would be many visitors then.

The police also had a walkabout and meeting with the public at Sunny Supermarket in Tanjung Aru, Inanam business centre and Kampung Lobong on Gaya Island.