Tuesday, May 18
You are at:Home»News»Sarawak»Strict enforcement vital in reducing road accidents — Manyin 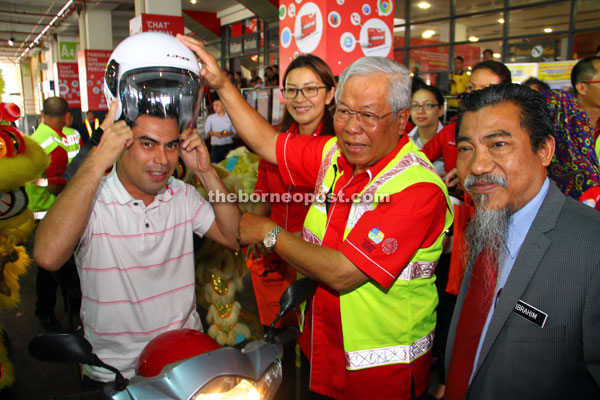 Manyin puts a Sirim-approved helmet on a motorcyclist as part of promoting the state-level road safety campaign after its launching yesterday. Also seen are Davina and Ibrahim (right). — Photo by Chimon Upon

KUCHING: The state, in collaboration with the police and Road Transport Department (JPJ), is set to take a tough stand on the enforcement of traffic laws as a last resort to enhance road safety.

Infrastructure Development and Communication Minister Dato Sri Michael Manyin Jawong said this is because public awareness of road safety has not been encouraging over the years despite the government conducting at least four road safety campaigns annually during festive seasons.

The Tebedu assemblyman pointed out that often accident victims would blame the weather, road, vehicle condition and even the lack of enforcement as the cause of their mishaps instead of their carelessness or reckless driving.

In this regard, he believed that strict enforcement is vital to minimise the number of road accidents. Thus, he appealed to motorists to change their attitude.

“Each person is responsible for their own safety on the road but unfortunately persuasion, education, awareness campaigns have not yielded satisfactory results. In the years since I took over this ministry, it seems that all government efforts to educate the public is not effective.

“I will call the police and JPJ on how we can work together to enforce the law. Strict enforcement would greatly reduce accident rate,” he told a press conference after launching the state-level road safety campaign in conjunction with the Chinese New Year celebration at Kuching Sentral bus terminal here yesterday.

Manyin pointed out usage of rear passenger seatbelt, speed limits and the requirement for “vehicles to keep left when not overtaking” as among the laws that must be strictly enforced here, suggesting the strict enforcement be done after May in line with the restriction on tinted vehicles nationwide.

“In Kuala Lumpur, all heavy vehicles such as lorries and buses are required to keep to the left lane. The requirement for the usage of rear seatbelt was introduced four years ago but yet to be enforced and when this comes into effect, offenders could face a maximum fine of RM300,” he continued.