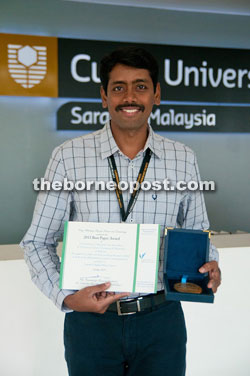 Dr Prasanna with his certificate and medal.

Dr Prasanna, from the Department of Applied Geology in Curtin Sarawak’s Faculty of Engineering and Science, received the award for the paper entitled ‘A Study on the Defluoridation in Water by using Natural Soil’.

The paper was co-authored by fellow academics S Chidambaram, S Manikandan, C Thivya, U Karmegam and R Thilagavathi of Annamalai University and AL Ramanathan and K Rajkumar of Jawaharlal Nehru University in India.

The KACST Best Paper Award included a certificate and medal for all the contributing authors and US$5,000 cash prize for the article.

It discusses a research project involving the removal of fluoride from water using locally available red soil by adopting the column method for an effective rural water supply scheme.

The paper was published in the Applied Water Science Journal in 2013. The articles in the journal are published in collaboration with Springer, a global publishing company that publishes original and reviewed articles as well as book reviews.

According to the paper, 80 per cent of the diseases in the world are caused by poor quality drinking water. Fluoride, an ion in water, has been proven to have a negative impact on human health. Excess fluoride in groundwater has become a threat in recent times due to the unavailability of potable groundwater resources.

Different methods of defluoridation, such as ion exchange, precipitation and adsorption have been implemented by researchers in the past.

When adsorption is used in the column method, it becomes more adaptable for field utility. Since the water supply is moved via gravitational force, the method requires no power supply, thus making it more cost-effective and easier to handle by local communities. In this method, the technology is transferred from the laboratory to the field. It is also considered a green technology, being environmentally friendly.

Dr Prasanna said the KACST award had inspired him to carry out further research to find innovative solutions to challenges faced by rural communities.

KACST is an independent scientific organisation administratively reporting to the Prime Minister of Saudi Arabia. It is both the Saudi Arabian national science agency and its national laboratories.

The KACST 2013 Best Paper Awards were based on a selection process by the editorial boards of each journal for articles published in 2013.