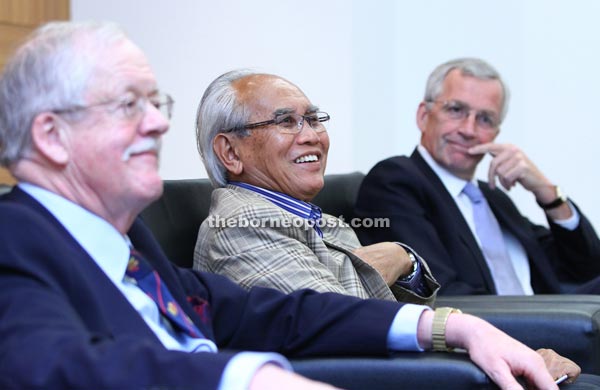 Jabu (centre), Ashworth and Helmer (left) fielding questions from reporters during the press conference. Earlier, the Modernisation of Agriculture Minister chaired a roundtable dialogue with the delegation. — Photo by Chimon Upon

KUCHING: The European Conservatives and Reformists Group (ECR) of the European Parliament has given its full backing to the state’s palm oil industry amid strong criticisms from European non-governmental organisations (NGOs) on the crop’s alleged damaging impact on the environment.

The parliament’s Committee on Agriculture and Rural Development member Richard Ashworth said ECR would defend the state’s palm oil cultivation practice against the passing of European laws that could affect the production of palm oil in the country.

The South East of England Member of European Parliament (MEP) mentioned that Sarawak had proven that palm oil was environmentally sustainable and that the industry had a phenomenal role to play in bringing wealth to the local community.

He criticised NGOs for using generic criticisms and making sweeping statements on the whole industry.

“We are conscious that there is a great deal of legislation being passed in the European Parliament within months or even years, which will heavily impact upon crops such as palm oil and in turn creating considerable effect on the prosperity of those producing the crop in Malaysia.

“We have been given great reassurance that in environmental terms, Sarawak has exceeded expectations. The agriculture development of palm oil, particularly the cooperative element with small farmers and shareholders scheme, is not just environmentally sustainable but has done enormous amount of good to lift small farmers out of subsistence agriculture and giving them a sense of involvement and dignified existence.

“On the series of ongoing debates in the European Parliament, we will make a difference. We will go back and speak on your behalf. We are on your side on this particular argument,” he told a press conference at Pullman Hotel here on Tuesday after attending a roundtable dialogue on the state’s palm oil industry.

Ashworth and Helmer were part of a delegation – including South East England MEP Nirj Deva and MEP representing Yorkshire and Humber region of the United Kingdom Amjad Bashir – on a two-day visit here to learn and better understand about palm oil crop and its cultivation, social element and environmental aspect.

Deva is also vice-chair of the Development Committee, while Bashir is also a Substitute Committee on International Trade.

Ashworth acknowledged that that there were examples of bad cultivation practices, such as the slash and burn policies of certain countries on their forests. He deemed the potential and productivity of palm oil crop and what it had achieved for the people and Sarawak as “fantastic” and should be cherished and encouraged.

Helmer also echoed Ashworth opinion on the damaging effect of what he labelled as unsubstantiated criticisms in the part of European NGOs and Green Party movement in the European Parliament.

“The Green organisation, which has so much influence in the European institution, does not focus particularly on Malaysia but are driven by an obsessive ideology and with little regards to facts. My personal view is they do a great deal of damage.

“The difference that has been made by us coming here is that we have a much clearer grasps on what is actually going on. One example is the issue of how much land have taken up for palm oil cultivation and how much land remains for the benefit of the environment.”

Citing Europe’s flawed biofuels policy as an example, Helmer mentioned that the European institution frequently introduced laws only to change it later on when the effect was found to be damaging.