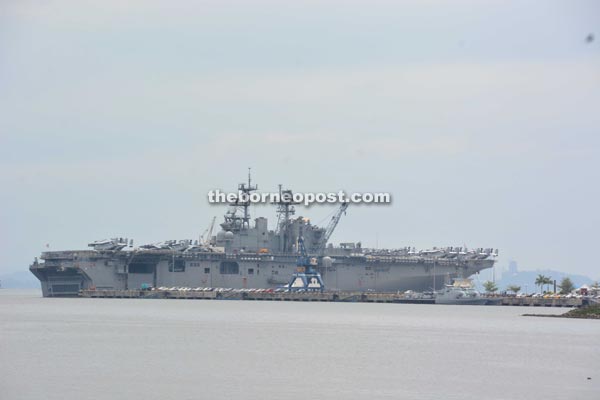 The Bonhomme carries some 2,800 marines and soldiers on board.

KOTA KINABALU: Having more than one United States navy ship docked in Sabah, Malaysia waters over the past couple of months may well indicate growing relations between the United States and Malaysia.

“It’s probably just a sign that the relations between the US and Malaysia, in terms of military cooperation, is expanding and increasing. And that’s a good thing,” said US Embassy Press and Information Officer Drake Weisert.

Met during a media tour to the USS Bonhomme Richard (LHD 6) and the embarked 31st Marine Expeditionary Unit (MEU), docked at the Sepanggar Naval Base since February 23, Weisert said that although Kota Kinabalu had seen US ships berthed in its waters before, Bonhomme could well be the second largest since the USS John C. Stennis’ visit in 2012.

“Every port visit by a USS is special but this is particularly interesting because I think we haven’t had a ship as large as this dock in Malaysia for quite some time,” said Weisert.

Over the past couple of days of its stop in Kota Kinabalu, the crew of USS Bonhomme Richard had been taking part in various activities including scaling Mount Kinabalu, friendly football matches with their Malaysian Navy counterparts, and conducting a community relation programme.

Commanding Officer Captain Joey Tynch had nothing but praises to sing about Sabah.

“It’s a lovely place to visit. The people are very warm and welcoming and we are having a fantastic time. This was our first liberty call in 17 months and the crew have been out to Kota Kinabalu over the last two days.

“We’ve had snorkelling trips, done white water rafting, a lot of shopping and a lot of eatery exploration downtown. A group of us climbed Mt Kinabalu yesterday, and I made it to the summit for the second time here.

“You have a beautiful view here but my view from Mt Kinabalu yesterday was incredible. We all are very excited and very pleased to be back here in Kota Kinabalu,” commented Tynch.

Bonhomme arrived at the Sepanggar Naval Base near on February 23, as part of its scheduled port visit to Malaysia.

Last month, the city also saw the docking of another US amphibious assault ship, the USS Comsctock (LSD 45).