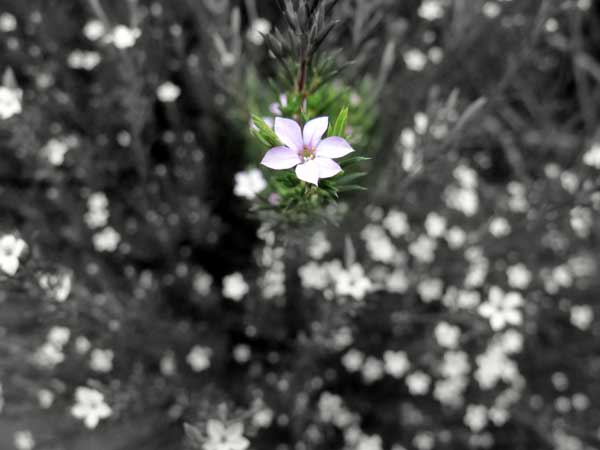 Bloom where you are planted! Choose to bloom anyway, despite all odds.

THE air was thick and intimidating in the crowded chamber that unusual morning.

An ordinary ex parte application would mean that you are to appear before the Honourable Judge alone but usually not a judicial review that you are required by law to serve on the Attorney-General’s Chambers.

The six pairs of learned eyes were testing: “Do you really think that you can get this through?”

A local councillor practitioner was more roguish, rubbishing my application for judicial review as he whispered to the seasoned state legal counsel, expressing his support for the government and the Election Commission, oblivious to the fact that his party is the odd one in BN to submit three objections on the delineation proposals. The veteran legal expert must have been most accustomed with such “flattery” that he responded with his usual polite smile and stillness.

On my part, I have learnt to not take offence of such acrimony or insensitivity. This is one of the most significant lessons that the late Sim Kwang Yang had taught us – that we have to be optimistic in life.

“For the gloomiest night will wear on to a morning,” quoting from the great author Harriet Beecher Stowe of Uncle Tom’s Cabin, a gem in the first batches of novels he gifted me after I had completed my Form Five studies.

HBS’ words, through the late Kwang Yang, that “It is a matter of taking the side of the weak against the strong, something the best people have always done” would ring in my ears in times of adversity and give me the strength to face challenges, even until today.

Armed with the 150-years’ old belief that has made many best people, I am, of course, not perturbed nor agitated by such mischievous poking from the ringside.

Alas, let me quickly put a caveat here. I am not saying I am a best people. I am just using the good weapon of the best people and introducing it to thesundaypost readers.

The ex parte leave application was heard that morning, more worthy written submissions were exchanged and a judicious decision was delivered on the Chinese New Year’s Eve. Leave was granted.

I would not go into the merits of the judicial review as the matter is still being litigated in the Court. But just a little about this guy called Charles Baker who lived in Shelby County, Tennessee.

In 1961, the population in Shelby County was about 10 times that of some of the rural districts in Tennessee. Baker hence felt aggrieved that the votes of rural citizens were over-represented compared to those of urban citizens, thereby he failed to receive the “equal protection of the laws.”

Baker and other citizens in Shelby County, therefore, brought the case against Joe Carr, then the Secretary of State for Tennessee.

As expected, there were many legal and political obstacles but the Supreme Court of the United States finally ruled that the matter complained of ought to be litigated in the Courts.

Of utmost importance, the sacrosanct legal principle of “equal protection of the laws” had led to copious judicious enunciations from courts across all continents to further the equally noble notion of “one person one vote one value.”

Are we not as good as the Americans 50 years ago? Whether as a private citizen, collective population in a township, lawyer or one in any arm of government? What is the justification for a vote in Gedong to worth more than five times that of Kuching?

The citizens’ groups like Bar Council, Bersih, Tindak Malaysia and ROSE have never been against given weightage to rural electoral constituencies, up to 33 per cent, and provided under the Federal Constitution until 1973 when it was quietly obliterated.

When we were tasked to file for the application for judicial review, it was taken up without any hesitation.

Indeed, there was an air of optimism around the legal table. Desmond, Jamilah, Fabian, Simon, Kuan Ching, Voon, Joshua and Cindy were as chatty and jovial in the discussion. The complete dearth of local case authority was of no deterrence to them. Armed with only one known American case authority, they reasoned, argued and joked (mostly) and at the end of two hours, we were all confident of a good arguable application.

The Election Commission will not be deterred. They will continue their roadshow in the coming week with showcasing their proposed recommendations which had received 64 objections, hearing them and making decisions on them by themselves. A case of the accused being the prosecutor and the judge, but not really, there will be another round of displaying their amended recommendations (if any) and submission to the Prime Minister and the Parliament for final approval.

The Honourable Judge has decided that the decision, action, and omission of the Election Commission in relation to the performance of their public function to publish notice and or disclose detailed particulars showing the effects of the proposed recommendations is subject to judicial review – that they are not above the law.

For me, I must admit that there were sleepless nights. It was difficult but I was certainly motivated by the opportunities.

What about you? Do you see life a hopeless end or an endless hope?

Previous ArticleOf doctors, pharmacists and abandoned houses
Next Article Dirty habits are hard to get rid of