Monday, February 17
You are at:Home»News»Sarawak»Fair mechanism for landowners affected by govt projects 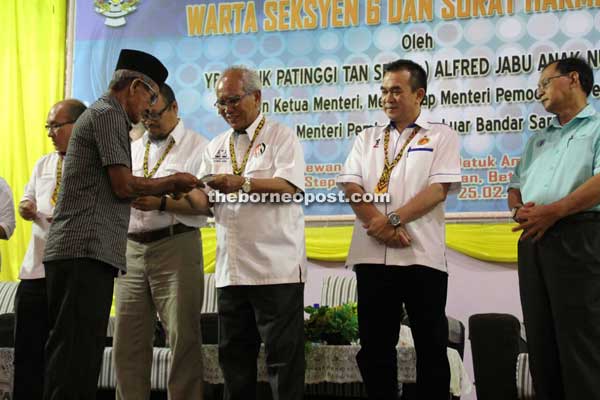 Jabu (third right) handing over a cheque to a land owner, witnessed by (from right) Romie, Robert, Anthony and others on stage.

BETONG: The people must realise that any development project undertaken by the government has to involve acquisition of land.

Nevertheless, Deputy Chief Minister Datuk Patinggi Tan Sri Alfred Jabu assures them that the government has a mechanism in place to ensure that affected landowners would be compensated accordingly.

“The allegation by certain quarters that the government has been robbing the people’s land to implement infrastructure projects such as roads and amenities such as schools, hospitals, electricity and water supply are all baseless,” he said when officiating at a presentation of compensation to local landowners, organised by the divisional Land and Survey Department at Dewan Datuk Amar Stephen Kalong Ningkan here recently.

A total of RM576,244 in compensation was disbursed to 65 recipients whose land were acquired for the implementation of four projects namely Tanjung Asam/Hilir Saribas/Beladin Road, Tanjung Asam Service Centre, Bungin water gate and the electricity cable project in Serudit area.

Those receiving individual land titles under Section 18 of the Ordinance are from Ulu Samu area.