Thursday, February 2
You are at:Home»News»Sarawak»SMK Lutong proud to have 10A+ scorer
For the freshest news, join The Borneo Post's Telegram Channel and The Borneo Post on Newswav. 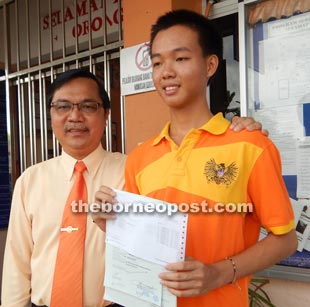 MIRI: SMK Lutong has retained its position as among the state’s top schools, thanks to outstanding achievements by its students who sat for last year’s SPM.

“Overall, we did far better (last year) than in 2013, in terms of quality and the results are satisfactory,” he told The Borneo Post when met after the announcement of SPM results yesterday.

He noted that the candidates did well across all subjects.

Overall, 363 students sat for the public examination last year and among them, Tay Jing Sheng emerged outstanding – having scored A+ in all 10 subjects that he sat for.

“I attribute such wonderful results obtained by the students to the teachers, school management and parents for their strong support and good cooperation,” Marcus Hugo enthused.