Monday, January 20
You are at:Home»News»Sarawak»Manyin tells SRB to act on public complaints 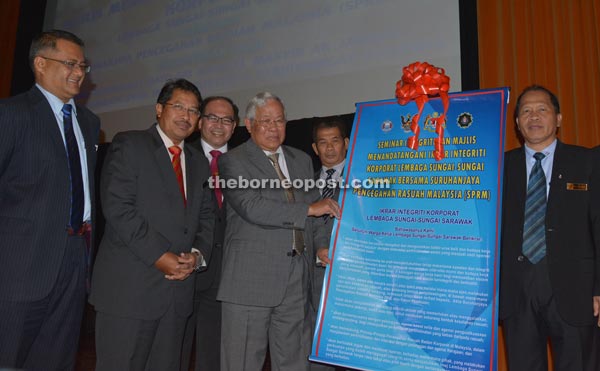 Manyin (fourth left) unveils the integrity pledge for SRB when performing the opening ceremony. Looking on from right are William, Murni, Badrul, Misnu and Safri.

KUCHING: Minister of Infrastructure Development and Communications Dato Sri Michael Manyin yesterday revealed he has received SMSes, Whatsapp messages and flying letters alleging that Sarawak Rivers Board (SRB) has not been doing an effective job.

He said while such allegations were disputable, they reflect the public’s perception ofSRB, which must be rectified.

“Though SRB is not a big agency, it is one of the most important enforcement agencies as it is looking after the rivers, and looking after all boats using the rivers. As minister-in-charge of the agency, I received SMS, Whatsapp and flying letters telling me that our agency is not effective, did not do that, did not do this.

“I always pass it (the allegation) to (the ministry’s permanent secretary) Safri Zainuddin and (SRB controller) William Jinep (to deal with). Whether they are true or not, these are the perception of the public. If their perception is such, this means they do not have confidence in us. It may not be true, but it is their perception,” he said when officiating at the integrity seminar and SRB’s signing of corporate integrity pledge yesterday.

As such, Manyin hoped the signing of the corporate integrity pledge by SRB, the first state enforcement agency to do so this year, will start efforts to put a halt to the misconception on the agency.

He said when an agency is weak, it would reflect badly on the minister and officers in charge.

“As frontline enforcers, if you are weak, definitely the organisation is going to be weak. Do not do work according to emotion, but do it according to the agency’s guidelines. As society gets more affluent, material needs become more important than spiritual.

“When you see friends drive nice cars, go for holidays, enjoy nights out in karaoke, sometimes you get tempted and take the things that lower integrity. Therefore, today’s signing of integrity pledge is not only important, but integrity must become your daily practice after this,” he said.

He quoted figures from a recent column by trade union activist Andrew Lo, which said Malaysia’s productivity was six times lower than United States, and four times lower than Japan and Singapore, and one of the reasons for it was low integrity.

He also said corruption is a ‘disease’ which can bring down the economy, and any country with rampant corruption will not be able to progress.

Meanwhile, speaking to a press conference after the function, Manyin said he would try to get all agencies under his ministry to sign the integrity pledge within this year.

He jested that if anti-corruption eventually becomes a habit and way of life among Malaysians, the Malaysian Anti-Corruption Commission (MACC) could close its office, adding that Malaysia could emulate countries such as Sweden, Norway, Finland, Denmark and New Zealand which did not even have agencies to fight corruption.