Monday, February 17
You are at:Home»News»Sarawak»Sarawak to host inaugural TVET confab 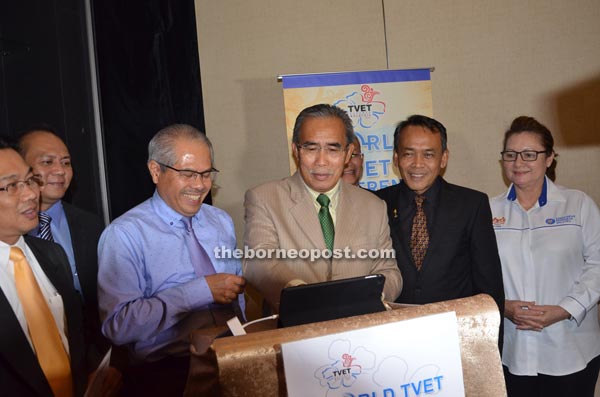 Len (centre), with assistance from Baharudin (third left), presses a button on a laptop as a gimmick to launch the TVET website.

KUCHING: Sarawak will be hosting the inaugural World Technical, Vocational, Education and Training (TVET) Conference at Borneo Convention Centre Kuching (BCCK) from Aug 25 to 27 this year.

This was announced by Assistant Minister in the Chief Minister’s Office (Promotion of Technical Education) Datu Len Talif yesterday, during which he also launched its official website.

In his speech before the launching, Len thanked the Sarawak Skills Development Centre (PPKS) and the state government for successfully bringing the prestigious conference to Malaysia and Kuching as the venue.

He said the conference was timely as it has what it takes to train a new generation of the workforce.

“The main issue to be addressed during the conference will be on government and policy, industry partnership, training centre programmes, leadership and innovation,” he said.

“These are the key factors in transforming TVET towards preparing a better workforce in the future market here,” he added.

He disclosed that the conference expected to attract 1,000 participants, out of which 200 would be from overseas.

With the presence of TVET specialists from US, Europe, Russia and Australia, he expressed confidence that the conference would offer a platform for wider networking and sharing of the development of human resources, especially for Malaysian participants.

“It is great to have an encouraging support from the world for this conference. I can say this is the most awaited event in the arena of TVET this year,” he elaborated.

As a show of the state government’s commitment to the conference, he said the Workforce Development Unit in the Chief Minister’s Department would be sending 100 delegates, particularly from relevant skills development departments, to the conference Len hoped the conference will help Malaysia to develop a highly skilled workforce as it moves towards a high income nation by 2020.

With SCORE, he said, around 1.6 million jobs would be created which would require some 500,000 skilled and semi-skilled workers.

On the TVET website, Len said it is the best channel to promote almost anything in the world and also the best way to communicate globally and to obtain more information on the conference.

Meanwhile, PPKS executive director Dato Baharudin Abdullah, who represented the main organiser of the conference, said they were very fortunate and grateful to have the full support of the state government in organising the conference.

Len later presented appreciation certificates to representatives of the conference’s partners and sponsors.