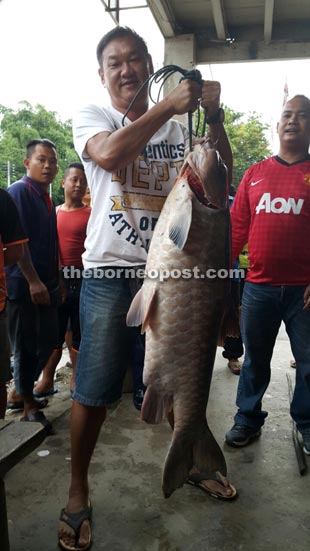 Chua shows the pricey empurau, which he purchased for RM15,000.

KAPIT: A man in Song paid a whopping RM15,000 yesterday for the prized local freshwater fish known as empurau.

After much bargaining at Song Bazaar, Chua Fun Tien became the proud owner of the massive 27kg fish caught by a lucky fisherman from Sungai Katibas.

He apparently got a bargain as the current market price for river-caught empurau is actually RM1,000 per kg, so he paid just slightly over half that at around RM555 per kg.

Chua said he would keep the fish to enjoy with his family members.

However, he added he is willing to share part of the rare catch if the price is right.

Empurau is the most expensive of Kapit’s freshwater fish due to its rarity and possibly because its name in Chinese sounds like eternal youth.

In recent years empurau has been raised in ponds, but the price of these fish is much lower at between RM500 and RM600 per kg.

The empurau caught from the Rajang, Baleh and Katibas rivers still command higher prices reportedly due to a difference in the taste of the flesh.