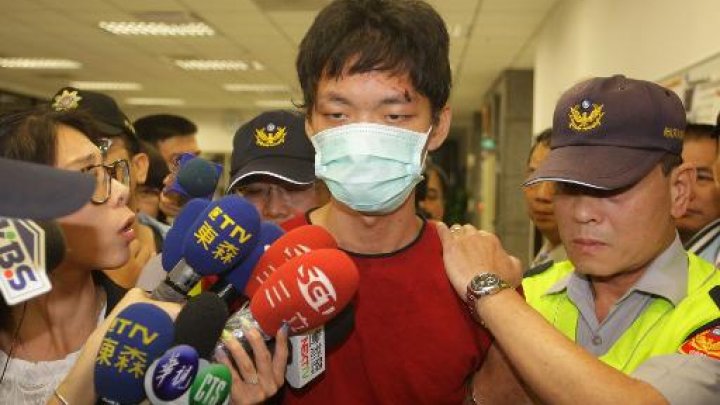 File picture shows Cheng Chieh (C), now convicted of a stabbing spree on the Taipei subway, being transferred by policemen at a local police station in New Taipei City on May 22, 2014 -© AFP/File

TAIPEI: A former college student was sentenced to death in Taiwan Friday for killing four people and wounding more than 20 others in a subway stabbing spree that shocked the island.

Cheng Chieh, 22, will face a firing squad after he was convicted on four counts of murder and 22 counts of attempted murder for the carnage in May last year, the first fatal attack on Taipei’s subway system since it launched in 1996.

“The judges sentenced Cheng to death as his means were brutal and his crimes were severe while he had shown no remorse,” Lien Yu-chun, a spokeswoman for the New Taipei district court, told AFP.

A court statement said that Cheng’s crimes “angered gods and men” and that the sentence would safeguard society.

“I am pleased and comforted by the ruling,” said Lee Ruei-hsiang, the brother of one of the victims.

“I think it would be unacceptable to everyone if he was not sentenced to death for committing such a horrendous crime in public.”

Chiou Mu-sen, the husband of another victim, urged Cheng to donate his organs after his execution to make up for his “terrible mistake.”

Prosecutors had sought the death penalty for Cheng, saying psychological evaluations showed that he was not suffering from any mental disorder when he committed the crime.

Cheng, who had pleaded guilty to the charges, was expelled by his university after the attack and was described by prosecutors as “anti-society, narcissistic, immature and pessimistic”.

Local media said Cheng had been obsessed with online killing games and had written horror stories.

Prosecutors said that he had vowed to carry out revenge killings after having trouble with classmates in elementary school.

Cheng’s parents initially asked for him to be sentenced to death, calling their son’s actions “unforgivable”.

However, they recently wrote to the judges saying that they were willing to accompany him to receive counselling “if there is still a chance for him”, the district court said.

Cheng pleaded guilty in his first court appearance last August, nearly three months after he used a long knife to stab travellers on a subway train, sending hundreds of people screaming and fleeing for help.

When the train pulled in to the next station, Cheng fled and was chased by police before being kicked to the ground by a passenger and overwhelmed by a group of security officials and commuters.

The incident shocked Taiwan, which is proud of its low levels of violent crime.

Cheng, who has been in custody since his arrest, can appeal the court’s ruling.

There are currently 48 prisoners on death row in Taiwan, all of whom will face a firing squad — the means by which the death penalty is implemented on the island.

Taiwan resumed executions in 2010 after a five-year hiatus following the execution of a soldier wrongly convicted in a child murder case. -AFP