Saturday, December 3
You are at:Home»Columns»How I See it»Can you feel the earth moving under your feet? 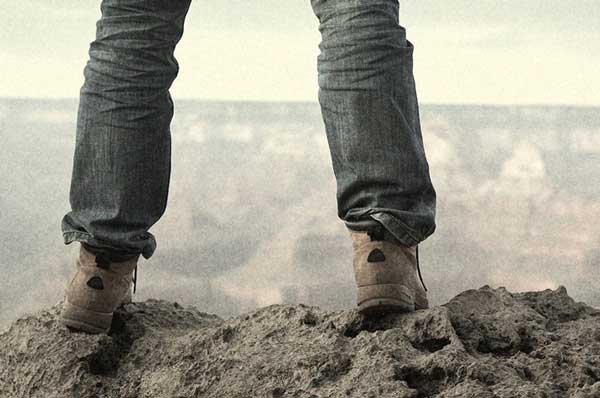 Stand on the solid rock of Hope, Faith and Love. All other ground is sinking sand. — (Picture from blog supportforoscar.wordpress.com)

“I feel the earth move under my feet,” the young man sang on his Facebook posting on September 30 when US$700 million was banked into the account of which he is a signatory.

“In Vegas, bring a jacket ‘cos it’s raining cristal ha ha.” He posted on October 11 after the money has been confirmed to be in the bank account.

No mis-spelling of the word crystal, the well-educated young man certainly knew what he was talking about. The investigative journalist is kind enough to provide a caption Raining Cristal – the world’s most expensive champagne. Raining Cristal is beyond any modest Sarawakian. I must admit it was something new that I have learnt that day.

US$700 million is RM2.5 billion! If I have that in my account, the earth will sure spin and throw me off my feet. Amazingly, for this group of youngsters, they kept their feet while the earth moved. They gathered their jackets to enjoy the raining cristal in Vegas.

Within months, young Malaysian high-flyers are proud owners of the most expensive ever mansions in Hollywood Hills. The money didn’t drop from the sky, neither did it come from any of those known multi-billionaires who have bottomless pockets.

Unfortunately, it was our money, Malaysian money, the taxes we paid and we are paying, the money that would have gone into the education of our children, the medical care, our rural roads, the basic amenities such as water and electricity.

1Malaysia Development Berhad (1MDB) is a strategic development company, wholly owned by the government of Malaysia, established in 2008 as Terengganu Investment Authority (TIA) and renamed 1MDB as a federal entity in 2009 to drive strategic initiatives for long-term economic development for the country by forging global partnerships and promoting foreign direct investments.

The Prime Minister is the chairman of the Board of Advisors of the company.

The fact that the federal sovereign wealth fund has accumulated astronomical debts of RM42 billion within a short span of six years, with its bonds issued downgraded to junk status by ratings agencies such as Standard and Poor and Fitch Ratings, is a looming financial catastrophe.

A working couple, both Batu Lintang voters, with their young daughter were having fried rice and sharing a plate of mixed vegetables next table two days ago. I was having the same fried rice and iced honey lemon with Ah Bee, my nephew, costing us RM15 altogether.

The learned mother, either a banker or accountant from the way she tossed the figures of national debt servicing and economic viability indices, was most wary.

“While we are taking our meals costing RM15 to RM25 out of our own pockets, our labourers struggling to earn minimum wages of RM800 a month, yet our country is paying some home service hairdresser RM1,200 for a hair dye. You have read the last Sunday Post column, I am sure.”

She did not finish her fried rice, I noticed.

Alike my many well-read constituents, she is not alone in sensing the economic cauldron and understands what needs to be done. It is more a national calling, in fact.

The first stinging alarm this year actually came in the words of Datuk Kadir Jasin, a veteran newsman who is always regarded as the voice of former Prime Minister Tun Dr Mahathir Mohamad.

He said the Romans had to choose between Caesar and Rome, and by analogy, he warned that Umno and BN are now faced with the same predicament.

“The choice is between holding on to the Prime Minister and losing the administrative capital of Putrajaya in the next general election,” he made his comment in this blog posting when the country was embroiled in the 1MDB controversies and devastating flooding in the east coast of peninsular Malaysia.

Nationally (and internationally), it has raised a lot of eyebrows when the PM announced in a statement (March 4) that after a briefing by 1MDB and its auditor Deloitte, the cabinet expressed confidence that no wrongdoing had been committed within 1MDB. The Auditor-General was ordered to vet the accounts and its report is to be passed for inspection by the Public Accounts Committee.

Interesting indeed, how could the cabinet clear 1MDB of any wrongdoing even before the AG has started its investigation?

Datuk Kadir Jasin was quick to blog about it, his commentary was picked up by the online portals early the next morning: “This could be useful for the PM. He now shifts part of the responsibility for 1MDB to the cabinet. What started off as his one-man show is now the collective burden of the cabinet.”

Veteran opposition parliamentarian Lim Kit Siang has pointed out a most pertinent question: Is the cabinet’s decision to audit 1MDB a scripted move to avoid having to address the issue during the parliamentary sitting commencing this week?

On our shores, we must be watchful of the development as 1MDB has teamed up with Chinese power transmission and distribution company State Grid Corp of China (SGCC) to undertake projects in Sarawak that would generate RM36.6 billion worth of economic value in the Sarawak Corridor of Renewable Energy (SCORE) aiming to subsequently becoming a major investor in SCORE.

Have the strategic joint venture started generated anything of economic value in Sarawak in the last five years? As Malaysians, Sarawakians are to bear a part of the RM42 billion debts and we are certainly made poorer as a state in the federation.

May be our state government should set up a state-owned company to assume the roles of 1MDB in the strategic joint venture with SGCC in the SCORE projects?

Save Malaysia? Save Sarawak? Can you feel the earth move under your feet?

Postscript: As I concluded this article, I read that the DPM had suggested that the PAC could commence its own investigation on 1MDB instead of waiting for the AG’s report, contrary to what the PM had said. Interesting. Is he being misquoted?

On the other hand, it is confirmed that 173 out of 191 Umno division heads have confirmed their participation at the “Solidarity with the PM” meeting held at the party headquarters in Kuala Lumpur on Sunday.

Previous ArticleBarking up the right tree
Next Article The Anthropocene