Saturday, October 31
You are at:Home»News»Sarawak»‘Keep quiet if you can’t help’ 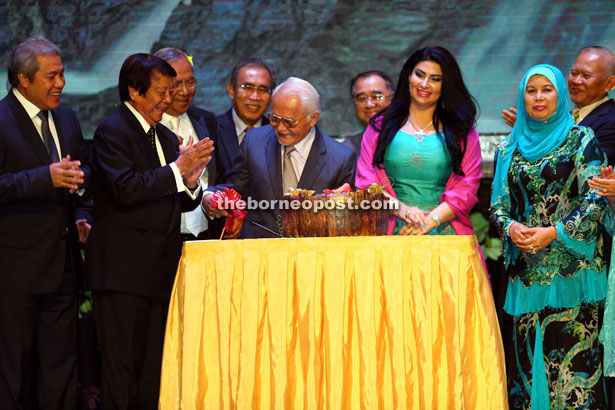 KUCHING: Chief Minister Datuk Patinggi Tan Sri Adenan Satem has chided non-government organisations (NGOs) who are good only at blaming the government and offering no solutions.

In view of allegations from several NGOs that his administration was not doing enough to halt illegal logging, he said he expected them to extend a helping hand to help the government solve the problem together.

“I want NGOs to help us solve it (problem) together. There are NGOs who scold us, but when we asked for their help, they don’t want (to help).

“Don’t just push the blame onto the government when you cannot come up with a solution to work together to solve it,” said Adenan at Sarawak Forestry Corporation (SFC)’s Appreciation Dinner for its former chairman Tun Pehin Sri Abdul Taib Mahmud on Saturday.

Adenan reiterated that the state loved its forest and wanted to preserve it as a heritage for future generations.

He praised those who had helped the state government curb illegal logging by alerting the authorities concerned, such as the SFC and Forest Department.

“Results show that the problem is not as small as we thought. The number of raids shows that it is widespread in Sarawak. If we don’t stop it, there will be nothing left of our forest …and if there is no forest, where do we put our orang utans?” Adenan said although efforts to combat illegal logging had been successful thus far, he said he would not be satisfied until every log was accounted for.

“I am sorry to say that the many times we carry out raids, the logs, machinery, and chainsaws will be there, but not a soul to be found, as if they know about the raid beforehand.

“There has got to be some degree of collaboration among the people. It has gone on for far too long, and we must put a stop to it once and for all.

“Some even have cash ready in hand to settle it there and then in broad daylight. We must put a stop in it.” He said the government would be introducing two legislations next month to tighten legal loose ends and to increase the penalty on wrongdoers.

Included, he added, would be the presumption that if a person is found in possession of timber logs not stamped properly, that person has to prove how the logs came about. Adenan said although the state had laws to curb illegal logging activities, the enforcement part was still weak.

“I have given the Forest Department 29 4-wheel-drives and 50 shotguns. They want an increase in everything, but they must show result.

“We must be firm on this matter or it will give us a bad name and reputation.” An example of defiance is the damage caused by ‘lori hantu’ (illegal lorries) on Bakun Road.

Height-limiting metal barriers that were meant to stop them from using the road were torn down within 24 hours after they were erected. Three stronger arches were then built to replace it, but they were torn down before completion, too.

“Now we have the police stationed there around-the-clock, and we have called in the military, too. We must be firm. We cannot afford to compromise. People are watching us and with us on this.”

Adenan added that helicopters had also been deployed to stop illegal logging.

In his speech, SFC chairman Datu Dr Yusoff Hanifah said SFC had been at the forefront of the anti-illegal logging campaign.

In the first two months of this year, more than 2,300 pieces of illegal logs with a total market value of over RM2 million were seized.

There was no letting up even on the recent Chinese New Year celebration, where seizures were made on the eve of the festivity.

“In this regard, the chief minister has made the right decision not to issue or renew anymore timber licences. This freeze will certainly help us curb this menace to our society,” said Yusoff.

On what SFC was doing to those seized logs, Yusoff explained in accordance to Standard Operating Procedure, the Forest Department was responsible for their disposal.