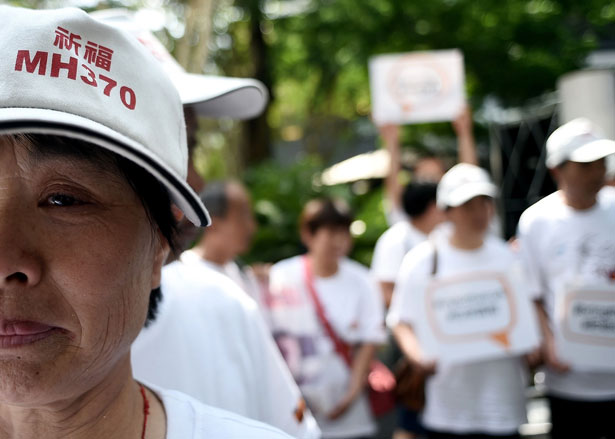 Relatives of Chinese passengers from the missing flight MH370, take part in a remembrance event in Kuala Lumpur. An investigation into missing flight MH370 has found no red flags relating to the crew or mechanical issues, according to an interim report released that shed no new light on the cause of the disappearance. — AFP photo

KUALA LUMPUR: An international investigation team set up by Malaysia interviewed more than 120 persons and visited numerous relevant bodies in the quest to get to the bottom of what happened to Malaysia Airlines (MAS) Flight MH370, which disappeared one year ago with 239 people aboard.

Among those interviewed were personnel of the Department of Civil Aviation, MAS, next-of-kin of crew, the refueler, flight caterer, aircraft cleaners, cargo operators and loaders, freight forwarders, suppliers and consignees.

This was according to an interim statement prepared by the Malaysian ICAO Annex 13 Safety Investigation Team for MH370 to provide information on the progress of the probe on MH370, a Boeing 777-200ER plane, registered as 9M-MRO.

Appearing on a television broadcast yesterday to share what had been done so far was Datuk Kok Soo Chon, who led the investigation team.

“The sole objective of the investigation of an accident or incident shall be the prevention of future accidents or incidents,” he said, adding that it was not the purpose of this activity to apportion blame or liability.

The interim statement, he stressed, was issued on the progress of the probe up to March 7, 2015, and was based on nearly 600-page of factual information gathered by the 19-member team.

Flight MH370 vanished under mysterious circumstances en route to Beijing from Kuala Lumpur on March 8, 2014, sparking a massive search which currently centres in the southern Indian Ocean off western Australia.

Kok said the team was now conducting analysis of the factual information and was considering these areas: airworthiness and maintenance and aircraft systems; air traffic controller operations from 1719 to 2232 UTC on 7th March 2014 (0119 to 0632 Malaysian Time (MYT) on 8th March 2014); cargo consignment; and crew profile.

Other fields are diversion from filed flight plan route; organisational and management information of DCA and MAS; and satellite communications.

“In the months ahead, the investigation team will need to analyse to draw conclusions and safety recommendations based on the factual information that have been gathered.

“In addition to the analysis and the conclusion phase of the investigation, steps taken will also include further validation of the factual information on emergence of new evidence,” Kok said.

He pointed out that the team expected that further factual information would be available from the wreckage and flight recorders if the aircraft was found.

In this connection, team members visited Subang, Penang and Muar as well as Beijing and Tianjin in China for data collection and interviews.

In addition, simulator sessions to re-construct the aircraft flight profile and system operation had been carried out, Kok said.

Kok emphasised that the factual information gathered to date and published on the Ministry of Transport website was of an interim nature and new information that may become available may alter this information before the publication of the final report.

“The investigation team clarifies that the factual information gathered contains facts which have been determined up to the current date only.

“This information is made available at this time solely to inform the aviation industry and the public of the general circumstances of the accident of MH370 and must necessarily be regarded as tentative and subject to alteration or correction if additional evidence becomes available,” he said.

Kok further said that the investigation team had prepared Standard Operating Procedures and checklists for investigation in preparation for the recovery of the aircraft, once it was located by the search team.

The team was established by the Malaysian Transport Ministry to probe the disapprearance of MH370.

Headed by a chief inspector/investigator-in-charge, it consisted of three committees, covering Operations, Airworthiness and Medical/Human Factors.

Liow said he had tasked his ministry to undertake an immediate review of the 578 pages of factual information that accompanied the interim statement.

“We will definitely take heed of the facts contained in the document and the appropriate measures will be undertaken once the necessary reviews have been completed,” he said.

He said the release of the interim statement and factual information pertaining to MH370 was done in compliance with Annex 13 to the Convention on International Civil Aviation on Aircraft Accident and Incident Investigation.

It states that if a final report cannot be released within 12 months, the state conducting the investigation should release an interim statement on each anniversary of the occurence, detailing the progress of the investigation and any safety issues raised.

“As we mark the first anniversary of MH370, my heart goes out to the families and loved ones of those on board.

“Malaysia, together with the international community, stands in solidarity with the next-of-kin during this trying time,” Liow said. — Bernama