Saturday, October 31
You are at:Home»Business»F&N to invest over RM100 million to expand footprint in East Malaysia 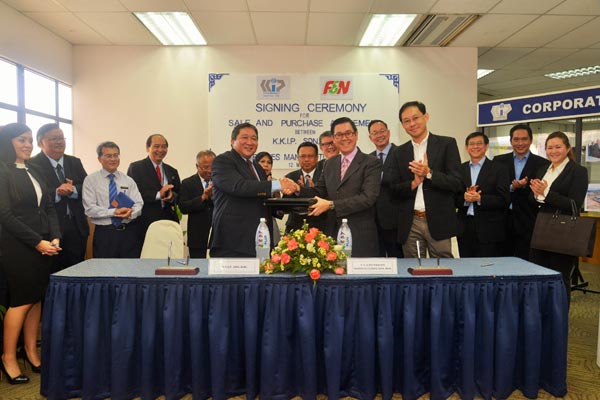 Lim (sixth right) exchanging documents with Melvin (sixth left) at the signing ceremony recently witnessed by Jainab, Bolkiah and other board members of both companies.

Valued at RM26 million, the new site will accommodate a bigger plant and effectively expand F&N’s footprint in East Malaysia in line with the group’s ongoing commitment to serve the local market.

The Group has also indicated that it will spend approximately RM85 million in building the plant.

F&N’s current plant in Kota Kinabalu, with an annual capacity of 4 million cases of PET beverages to service Sabah and Sarawak markets, is nearing its full capacity. In just three years, production output increased by more than 20 per cent to accommodate growing demands.

The sales and purchase agreement (SPA) for the land was signed by Lim on behalf of F&NHB at Kota Kinabalu on Thursday.

Scheduled to be operational within the next six years, the new plant will have the capacity to double its current output.

“Options to extend production capacity at our current site are limited and the new location will allow us to scale up our beverages operations as well as explore the potential of integrating manufacturing capacity for dairies product,” Lim added.

F&NHB foresee much potential that can be unlocked after the relocation of its current manufacturing plant to KKIP, located on a 2.6ha site at 5.5 miles Tuaran Road which, is now a prime commercially-developed area.

The site is expected to be handed over upon completion of infrastructural works within 24 months of the signing of the SPA.

“Sabah and Sarawak are very important markets for the F&N Group and we look forward to extending our role as a leading investor and employer while growing the state’s economic capacity,” Lim added.

F&N Group employs about 500 employees in its East Malaysia operations and invested RM43 million over the last five years on its facilities in Sabah and Sarawak.