Sunday, January 19
You are at:Home»News»Sarawak»Tredrea and Kelabit heroes to mark Bario landing on March 25 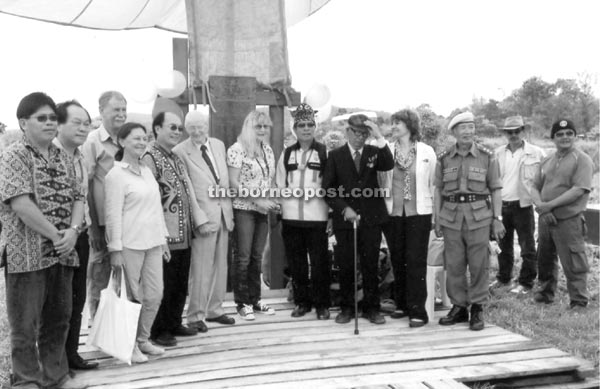 A 2013 file photo showing members of Rurum Kelabit Sarawak together with Jack Tredrea (sixth from left) at the unveiling of the Bario Commandos Parachute Landing (1945) Memorial Wooden Plaque in Bario.

KUCHING: This year, more precisely March 25th, marks the 70th anniversary of the landing of Allied Forces in Bario in the Kelabit Highlands.

To commemorate this historical occasion, a special ceremony will be held in Bario. It will be attended by the only remaining member of the Z Special Unit, Commando Jack Tredrea, and families of the local Kelabit heroes who worked alongside the unit.

Tredrea, who is now 95 years old, will attend the ceremony with his daughter. Also attending the event will be David Sanderson, the son of CF Sanderson and Judith Heimann, author of ‘The Airmen and the Headhunters’.

This landmark ceremony is organised by the Rurum Kelabit Sarawak with the assistance of Sarawak Tourism Federation Heritage Development Committee who designed and created the commemorative plaques.

According to Rurum Kelabit Sarawak president Dato Isaac Lugun, the ceremony will be a memorable event held in remembrance of the brave soldiers and those who helped them.

“This will also be a significant event with the presence of all those who participated in the events following the arrival of the Unit. As many of those who were initially involved are not around anymore, their descendants will take their place,” he said.

“The event will start off at the exact time the landing first occurred and as close to where it first occurred. This will be followed by a moment of silence and the laying of the wreaths at the memorial. In addition, the Bario Bamboo Band will play Amazing Grace and in the evening, a reception will be held at the Bario Asal Longhouse.”

Isaac also mentioned that the arrival of the Allied Forces in Bario and the participation of the Kelabit people in the fight for peace had a significant impact on the Kelabits.

“The landing of the Allied Forces in the Kelabit Highlands brought about changes and awareness of this remote community. It brought with it education and development to subsequent generations. Major Tom Harrisson, in his own capacity, and later as Curator of the Sarawak Museum played a large and significant part in the years after the war.”

Citing Tom Harrisson’s book, ‘World Within’, he said that while some of the local operatives were decorated for their war services, many were not. “Kelabit leaders such as Penghulu Lawai and Penghulu Miri were instrumental in the war effort and rightly, they were honoured,” he said.

“While Penghulu Lawai was awarded the British Empire Medal (BEM) other members of the community were also honoured with the Pacific Campaign and King George V medals. Penghulu Lawai was the first to greet Harrisson and his men and garnered the entire Kelabit community behind this effort. Our people took enormous risks and played an important role towards the success of the Semut operation. Their effort and the efforts of others should never be forgotten.”

The 70th Anniversary memorial service is important as it acts as a historical touchstone. “It links the past to the present and enable people to remember and respect the sacrifice of those who fought, participated and those who gave up their lives in the conflict,” he added.

It was said that on one cold, misty morning on March 25 in 1945, a Liberator flew over the tiny settlement of Bario in the Kelabit Highlands. Out of the hatch of the Liberator, shot out four young men clinging to parachutes and landed on the Plain of Bah.

A little while later, another Liberator circled the plateau and four more parachutes descended from the air.

These eight brave, young British and Australian men were members of the voluntary Z Special Unit and their mission was codenamed Semut 1.

Their mission was to establish initial contact with the indigenous people of Borneo and to train and deploy them as guerrilla troops against the Japanese forces. This marked a significant chapter in fight for freedom and for peace in Sarawak and the liberation of the island of Borneo from the Japanese.