Saturday, February 29
You are at:Home»Columns»Uncle DI»That twig on the bonnet 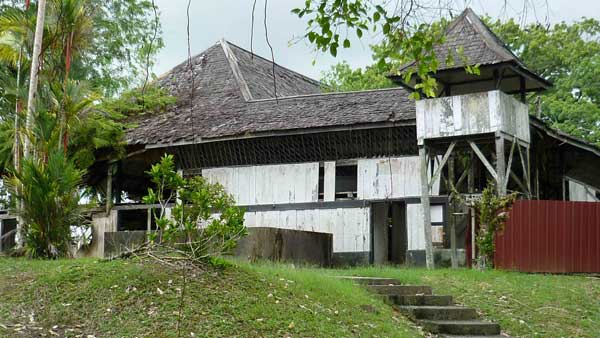 ON a windy day, a twig snapped and fell on a car below!

The culprit was traced to a tree in the vicinity of the newly-rehabilitated Fort Alice on the hill at the waterfront in Simanggang. On account of the sin of one dead branch, the mother tree and 10 others near the fort must also go. All of them were regarded as posing a potential danger to the public.

So it was decided in January by a committee of government officials to cut down certain trees and trim the rest. The job was entrusted to the local council’s tree felling squad. While the logging was in progress, did anyone raise one little finger to object? No, it was the Rajah’s order and his word was law. Sounds like a 19th century Simanggang.

This decision has caused much unhappiness not only for the conservation architect Mike Boon and his team, but also for the members of the Malaysian Nature Society, the Sarawak Heritage Society,  History buffs in general, and lovers of any authentic landmark. We don’t have so many of them that we can afford to waste them!

All condemn the wanton slaughter of the beautiful trees surrounding a famous old fort. For many years it has stood there forlorn and uncared for, but now restored to health, thanks to the state government which provided the funds for the repairs.

The restoration taking two years to complete was going to be submitted to the Institute of Architects and the Architects Regional Council for consideration of an award. But with the trees mostly gone poor old Alice looks like a plucked chicken. Chances of winning some prize are seriously diminished if the historical object is surrounded by a lunar landscape.

The chopping of the trees is unacceptable. However, what is done cannot be undone. We have to move on and think of a bigger picture.

Despite this setback, we hope that the conservation architects will submit the project all the same for an award for a job well done. We wish them luck.

In the circumstances, let us be consoled by a promise that trees will be planted again on that hill. As the saying goes, “Patah tumuh, hilang berganti.” Acacia mangium is easier to grow and fast growing but, according to a forester friend of mine, the species cannot last for more than 15 years, so go for some hardy species like Belian or Engkabang (Shorea).

The shrubs and flowers planted around the fort were described by AB Ward, a cadet officer working at the fort in 1899.   “Like most outstation forts it was built of massive ‘belian’ or iron wood in an oblong enclosing a small courtyard. The exterior was protected against the attack of spear-armed natives by a latticed screen from the eaves. The hill itself was sheer on the river side, but elsewhere its slopes were shady with trees and bright with flowers – cannas, jasmine, Honolulu creepers and the mauvy blue morning glory.”

When the Resident organises a tree planting project to cover the bare slopes around Alice, please consider also planting Bougainvillea, my favourite. Thank you.

Meanwhile, forget about that twig. Instead, read the following story – about the Ranee and the Kayan chief in connection with the fort.

The Ranee had a dream

Ranee Margaret, the wife of Rajah Charles, often accompanied her husband to Simanggang and stayed at a house near the fort. When Charles was away upriver busily organising warfare, she preferred to sleep at the fort where a couple of Malay guards and a dog protected her. One day, while Charles was away, the Ranee saw a flotilla of boats full of Kayan warriors coming up the Lupar  and soon landing at the jetty below the fort. The leader was Tama Paran offering his service to the Rajah to hunt the Ibans upriver.

The Ranee said she had no authority to accept the offer on behalf of her husband. This was true. Could they wait for the Rajah himself to give the green light? The visitors were restless and ready for action. She was scared to death, fearing that these wild men might proceed upriver despite her plea not to, and help themselves to a few innocent Iban heads on the way.

She did not know how to handle the situation but was told by the Malay guards at the fort that the Kayans believed in dreams. She told them of one of her own. She told Tama that in her dream her husband said he would be home on the morrow.

This was a pure white lie and a dangerous gamble but by a strange coincidence, Charles did return the next day. The offer of help was politely rejected and the Kayans moved downriver en route to their own country in the Rajang.

There are several other stories connected with the fort which can be read in the books on the Brooke Raj. They should all be in the library of the new museum. Hopefully, as many books and other publications on the history of the district will be made available for the reading public there.

The naughty branch from a tree that had fallen on the car is a diversion; more importantly, Alice is alive and in safe hands again; she would be glad to receive visitors soon.