Thursday, January 27
You are at:Home»Features»The blowpipe — a legacy of art and survival 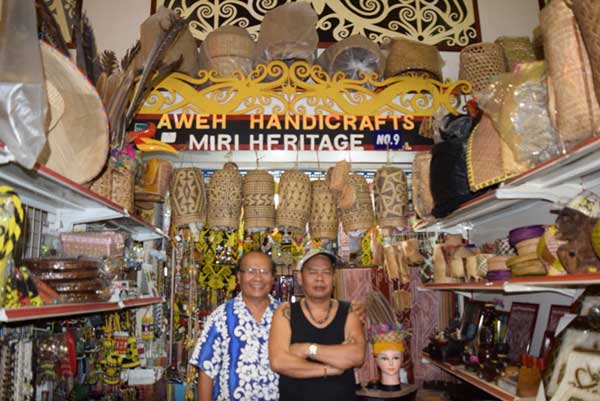 Ami (right), at the stall that bears his wife’s name, with Nelson.

AMI Unja is a humble guy who ‘dresses up’ or adorns blowpipes with rattan weavings.

He has been selling his attractively designed blowpipes and other artefacts at the Miri Handicraft Centre for the past 15 years.

Ami and his wife, Aweh Emang, from Long Moh, have made a name for themselves among the cultural beaders and craftsmen in the resort city.

While Ami is an Iban rattan craftsman, specialising in weaving rattan decorations on blowpipes and a wood carver especially with kayu hujan panas, Aweh is a Kenyah beader as well as a basket weaver.

Both are enterprising and talented in their own specialities. And not surprisingly, Aweh is a shooter to be reckoned with in women’s blowpipe competitions.

Nelson Janting, a handicraft stall owner and retired teacher, said the Iban blowpipe is similar to the ones made by the Penans.

Previously, a blowpipe would take three to four months or longer to make using very primitive methods of ‘plain drill and jungle scaffolding’.

In the old days, the longhouse blowpipe was not only for decor but also a functional weapon — with the craftsman holding special social status as the pride of the community.

The blowpipe is perforated by means of a long metal rod with a chisel-shaped bit. The craftsman chooses a good hardwood such as belian with a dark colour. Some blowpipe makers even build a hut just to get their work done in isolation and solitude.

Today, Ami sells belian blowpipes, some of which can fetch RM800 each.

A factory nowadays can easily bore a hole in a rod of any width and size,  producing a blowpipe in a matter of hours. But Ami pointed out it is just not the same because a slight mistake may mean the blowpipe is not ‘chun’ (accurate) in hitting its target.

“A hand-made blowpipe is still the weapon of one’s heart’s desire,” he said.

The blowpipe is usually around seven feet long with a metal spear tied with rattan at one end. The dart is inserted at the other end, using the spear to point to the target.

Some blowpipes are shorter – two feet in length — for short distance shooting. The Americans have even copied the blowpipe by coming up with a metal foldable version obtainable from reputable stores in Labuan.

An article describes the blowpipe as a weapon made with a piece of strait-grained wood, roughly shaped to about two metres with a 15-centimetre diameter.

From time to time, water is poured into the hole to float out wood chips. The pipe is trimmed and whittled to a diameter of about five centimetres after the drilling is completed.

Then the finished weapon is polished with a tough-grained, slightly waxy leaf. The bore of the blowpipe is very slightly curved to compensate for the weight of the weapon in use as it is horizontally held. The bore is polished by means of pulling lengths of rattan through it.

One writer calls the blowpipe a weapon of the natives of Sarawak, used as an aid to track through the rainforest, and as a hunting tool for live food such as squirrels, wild boar and birds.

“An experienced hunter can accurately hit his target at marvellous speed with a single blow at one end of the blowpipe,” he noted.

Ami’s speciality is weaving rattan around the blowpipe to give it a very classic, unique and one-of-a-kind finishing.

A purchaser can even ask for custom-made decorations for the length of rattan-matting to protect the precious weapon. 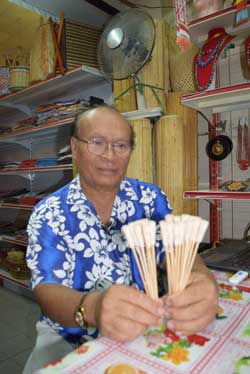 Ami said he was inspired by his mother who was famous for her mat-weaving in Niah.

In the early 1950s, many Ibans migrated to Niah where they settled to plant rubber and padi under the colonial government’s programme for rice cultivation and later rubber planting schemes.

Growing up in the beautiful Niah countryside, Ami learned the art of mat-weaving and became very skilful at it.

Rattan handicrafts also proved to be important assets when he started working at a timber camp in Ulu Baram. He met his wife in Long Lama.

According to Ami, he could be the only one in Sarawak using fine rattan to decorate blowpipes.

To encourage people to buy blowpipes, the couple hold blowpipe shooting and training programmes on weekdays at the Miri Handicraft Centre.

Sometimes, about a dozen visitors call at the centre to try out the blowpipes. The price is very reasonable — 10 darts for RM2.

Furthermore, each year, the Kenyahs hold a blowpipe competition in Miri, drawing many contestants and spectators.

Of course, the darts Ami and Aweh sell at the centre are not the poisoned darts people have read about. There are poisoned darts but no one sells them — just in case they are abused.

Nelson and Ami said the original darts of their forefathers were metallic, or at least with a metal tip, coated with the sap of the Ipoh tree and the venom of a poisonous snake, usually a cobra. Once hit, a monkey would be dead in seconds.

A lot of myths surround the Ipoh tree.

Why is it that the Penans and those in the know are reluctant (or unwilling) to teach others how to recognise this tree? It is simply that they do not want the tree’s natural poison to fall into the wrong hands.

Then, there is this story about an Ipoh tree near Skrang.

An Iban may see the tree from a distance and walk towards it but when he reaches the tree, he cannot find it.

The Penans are known for ‘walking through the jungle in silence’ as they believe talking is not good to the spirits of the forest.

The Penans also believe many trees will disappear from human sight if human sounds are heard in the jungle. To them, talking is best avoided in the forests of Borneo.

In fact, many people have been known to disappear for being boastful while hunting in the forest – like bragging about how big the animal they caught was or how they managed to run away from a bear.

It is believed the jungle spirits do not take kindly to jokes about their domain and they regard boastful talk as mocking their dominion over the flora and fauna. 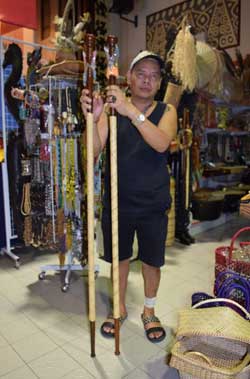 Ami with two of his prized rattan decorated blowpipes.

The Tajem tree is another tree with a poisonous sap.

According to many hunters, wild boars, hit by darts armed with this toxic sap would soon collapse while monkeys so stricken would die within seconds. This was also confirmed by Nelson.

Therefore, hunters who carry poison darts must keep them in a special container and also ensure the darts do not rub against each other but are separated by a bark or a thin plastic sheet or by other methods known to the Penans or the Ibans.

No one should try touching a poisoned dart with bare hands. It could be fatal.

“But some are mainly for ceremonial purposes. I don’t make them. The Penans make good ones and I value them a lot. After I polish and dress them up with rattan weaving or matting, they look very good.”

Ami uses kawit, a special technique of rattan-weaving which tightens the blowpipe and the parang (long blade) sheath.

Besides protecting the blowpipe and parang, the rattan also prevents the handler from making mistakes in handling the blowpipe. Slipping is prevented and the position of the hand is also ascertained.

Another style of rattan-weaving is called simpai, normally used by the Ibans to protect and decorate parang handles and sheaths.

It is, indeed, a wonderful experience to see a craftsman lovingly weaving rattan strips into a pattern on a blowpipe and ending up producing a work of art for display.

Blowpipe collectors pride themselves with good samples made from rare wood such as belian while some even bring eight-foot long poles from other countries to be fashioned into good blowpipes by local craftsmen.

But Ami is always happy to provide that special aesthetic touch with his rattan-weaving to make a blowpipe an artistic statement rather than a weapon of death.

He feels the blowpipe is for survival, food gathering and artistic display, not anything negative.

Moreover, a good collection of blowpipes is a good legacy for a man to pass on to his progeny. 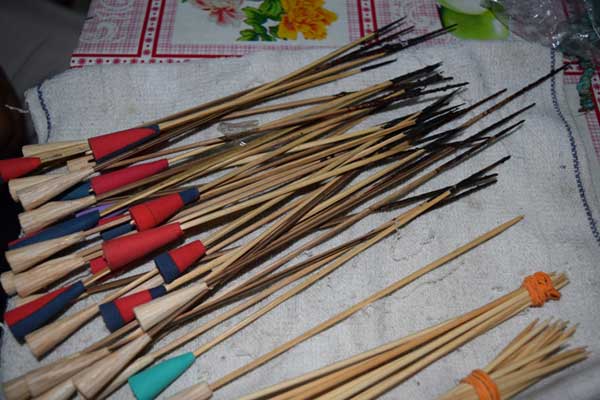