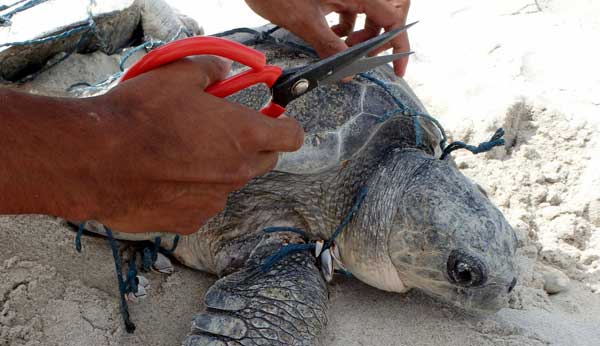 A volunteer works to free a turtle from a discarded net.

LAST week’s column was about the proposed name for a new geological epoch, the Anthropocene to follow the Holocene and before that the Pleistocene.

I would actually like to suggest the new epoch be termed the Plasticscene. Why?

How many of us, on a family day at the beach, have combed the high tide mark looking for colourful seashells or interestingly shaped bits of driftwood but have been horrified by the amount of plastic that has been deposited on the sand or shingle by the previous high tide?

I have seen this over the last 60 plus years on United Kingdom and other European beaches as well as in East Africa and in Sabah and Sarawak.

On these public beaches there are but a few local conservationists to clear up our man-made filth, unlike private hotel beaches in Borneo, Mauritius, Kenya and the UK where staff regularly carry out morning beach sweeps.

What is this plastic substance that bedevils our lives? It was invented in 1856, in England, by Alexander Parkes but it was in 1909 that a New York-based Belgian scientist, Leo Baeckeland, invented the first synthetic polymer – Bakelite.

Between them the word plastic – a substance that can be moulded by heat was coined and came into our everyday lives in a variety of forms to end up in our garbage bins.

However, we see plastic bags thrown out of cars, illegally dumped by the roadside, blown around streets and floating in rivers. It is only on the Singapore River that I have seen motorboats driven by city council employees hourly panning the length of that river to retrieve plastic rubbish. And remember: Singapore is a Fine City!

For several years in the UK I have cursed my local council’s household waste disposal company for insisting that certain types of waste must be placed in a variety of coloured bins.

Food waste must be in biodegradable bags inside the brown bin. Glass bottles and newspapers in the green box. Tin cans and anything metallic in the black box together with cardboard and old clothes. General household waste goes in the big black wheelie bin and garden rubbish in the all-green wheelie bin!

I questioned my council’s waste removal department as to what happened to all my rubbish after it had been collected. I was made to look like a fool when I was assured that these waste products no longer go to land infill sites but to cleverly designed recycling plants. Some even generate energy.

If plastic recycling does not occur then to where does this garbage go? You have already guessed the answer – into our oceans.

In 1975, the US National Academy of Sciences estimated that 0.1 per cent of global plastic production was swept annually out to sea. Forty five years later, in 2015, we have reached the state of shock horror!

At the annual meeting of the American Association for the Advancement of Science, held last month in San Jose, California, Dr Jenna Jambeck, the assistant professor of Environmental Engineering at the University of Georgia presented a fascinating and all-revealing paper.

This was based on the research of environmental scientists – six American and one Australian – whose findings disclosed just how much plastic our world’s coastal nations produce annually and how much of it could potentially reach our oceans.

By their calculations, 15 to 40 per cent of dumped plastic goes into our seas. The 192 coastal countries identified, with sizeable coastal populations, jointly deposited an average of eight million metric tonnes of plastic waste into the sea in 2010.

This amounts to covering every single metre of every coastline on our planet with the equivalent of 45 plastic grocery bags each packed with plastic waste.

Whilst these horrifying statistics make us gasp, we still do not know where 99 per cent of the oceanic plastic debris ends up or what impact this debris has on marine life and thence into the human food supply chain.

The US environmental scientists forecast that the annual amount of all discarded plastic waste reaching the sea will be doubled in only 10 years’ time!

Adding weight to their findings, the United Nations Environment Programme calculated that there are now 13,000 pieces of plastic waste per square km of ocean.

The calculations and predictions of Jambeck’s team are based on the rate of increasing industrialisation in developing countries and those countries’ estimated rates of population growth and established waste-management systems on land. These researchers ranked, in table form, each plastic mismanaged waste country in the world.

Plastic and other rubbish are seen floating at a harbour.

Satellite imagery of our oceans provides graphic detail of the clusters of plastic waste swirling around as eddies where various ocean currents meet and change direction.

These are the points of accumulation of floating debris and are known as gyres. The largest of these plastic gyres is commonly called ‘The Pacific Garbage Patch’ or ‘Plastic Island’ lying midway between Honshu, Japan and the US Californian coast. This plastic island’s area is the size of the state of Texas!

Apart from these plastic sea soups, equally disturbing are the other areas of the oceans where plastic substances accumulate. We easily observe them at the high tide mark on beaches often the dumping ground of offshore passing ships and discarded nylon fishermen’s nets.

We may not see the more sinister plastic debris on the sea bed. Whilst snorkelling in the South China Sea and in the Indian Ocean, I have observed these cast-offs below me which are being slowly embedded in sand or lodged in crevices in coral reefs.

Plastic substances could take between hundreds and thousands of years to degrade, and act like sponges in absorbing other chemicals in our oceans.

Seabirds and fish eat these plastic pieces. Dolphins, seals and turtles devour them, liking them to fish in their daily search for food.

Turtles, if not ensnared by discarded fishnets, readily ingest plastic bags which to them resemble jellyfish and unfortunately swallow them whole. The solution to this environmental dilemma afflicting our planet is by each nation taking a more proactive role to prevent plastics entering our oceanic system.

We have already woken up to this in the provision of biodegradable shopping bags at the checkout points in stores. As voluntary neighbourhood watch schemes to prevent household burglary have been established in the UK and in Sabah and Sarawak, so we should set up beach watch and beach clean-up days to cleanse our beaches of plastic junk.

Such voluntary work has been well reported in The Borneo Post and, through local residents’ initiatives and those of universities and local schools, our ‘burgled’ beaches have been regularly cleared of plastic debris. In the UK, in beach clear-ups, the most common plastic object identified is the water bottle and it is estimated, there, that people buy and discard 15 million plastic bottles daily!

Do we want, in the distant future, for geologists to find rock strata uplifted from the sea floor by tectonic movements to record that in the 20th and 21st centuries we lived in the Plasticscene epoch? For that rock strata, whether of sandstone of siltstone, will record our damage to our planet. Archaeologists will reveal artefacts from our Plasticscene Age to compliment the Stone, Iron and Bronze Age findings of long ago.

Let’s be more positive about our current problem to reverse our negligent ways both in personal terms and internationally. Yes, we all need plastic in our lives but we all need to know what happens to it when we discard it, not only for our own survival but equally as importantly for the future generations of our families. I genuinely hope that all nations can get a firm grip on this problem besetting our world.