Saturday, August 20
You are at:Home»Features»Throwing needy students a lifeline 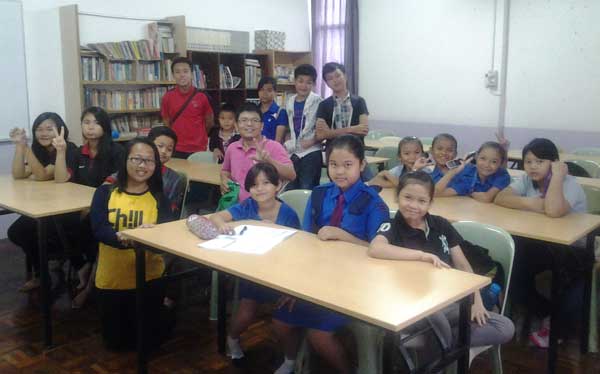 Patrick with a group of students taking part in the free tuition programme.

POVERTY nearly forced a bright young girl from a squatter colony in Kuching to quit school and become a teen housewife.

Living in a state of deprivation, she saw no hope, no future and lost the desire to study.

A lack of parental supervision is also said to have pushed her astray outside school.

While in Form 1, she liked going out with the other boys and girls — some older than her. She grabbed every opportunity to sneak out and loiter with her peers when her parents were at work.

Things, however, have changed for the better for this young girl thanks to the Trinity Learning Care’s (TLC) — provided by the Trinity Methodist Church (TMC) at Jalan Ellis, Kuching — intervention.

The TLC students’ recruitment team, headed by Pastor Patrick Taie, reached out to this girl before things got worse, helping her to walk this life with hope for the future.

She is now among the needy students receiving free tuition at the TLC, whose education programme targets poor non-Muslim students living in squalid city slums or rented rooms with their parents.

Free tuition is provided from kindergarten to Form 5 levels every Saturday morning.

“I’m telling you this story not just because it’s sad, but also because it does seem that being poor makes it hard to learn as I have discovered from my encounters with the students I recruited.

“And when it’s too hard to learn, they make a wrong choice which can further lead them to live in poverty.”

The girl and her family live in one of the squatter colonies in Kuching.

“This girl is smart. She is capable, kind and friendly. She said she had tried her best at school but her life was too hard. You see, she comes from a family where the parents are out working all day just to get by,” he said.

Patrick, who does public relations for TLC, said from having seemingly lost all hope, the girl has now become very positive in her outlook and is thinking very seriously about her future.

“Now she knows her future is very important and she is working hard and doing very well in her studies. She said if I had not met her and brought her to our learning centre, she might have gotten married by now.”

He related how when he first met the children, some had very negative mindsets.

“They believe just because they are living in a state of deprivation, succeeding in school is beyond them — or at the very least, a very difficult challenge.

“But all of them are different and more confident now. They are more serious in their studies, spending most of their free time doing revision since joining Trinity Learning Care.”

However, Patrick pointed out that not all people living in poverty or growing up in squatter colonies have negative mindsets.

“Some are very excited about the TLC’s free tuition offer. A few who joined the free tuition programme have excelled in their studies and life.”

These students, he said, had worked hard to hold on to life against a barrage of negative circumstances so that they could enter university and have a better future.

“I know a few of them who have secured good paying jobs in the public sector while some are still studying in public universities.

“One is a girl who works in one of the federal government departments. When I met her recently, she told me she planned to buy a house for her family, now living at one of the squatter colonies here.”

Patrick said their hard work and strong commitment to change things for the better, which their poverty-stricken parents had, in so many ways, failed to accomplish, was admirable and heart-warming. 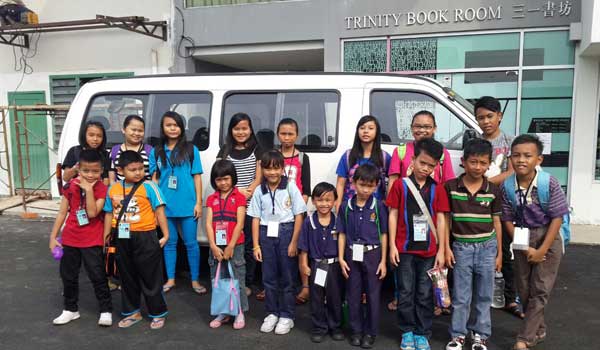 The students get ready to go home after tuition at the TLC.

Always a way out

Reports seem to suggest that poverty without hope but with isolation, hunger, poor living conditions, racism and numerous daily reminders of social exclusion sometimes lead to the immediate risk factors for immorality and further slips in life.

Poverty may also lead to a lack of self-esteem, the experience of oppression, a lack of hope or empathy or sense of belonging, impulsiveness and others.

However, there is always a way out.

Education is universally seen as one of the best ways out of poverty and as a sound investment in the future of individuals, families and communities, and thus, in the social fabric of our entire society.

Although primary and secondary education is free in the country, a lack of resources among poor families makes it doubly hard for their children, especially in receiving quality tuition from outside.

The TLC was created to help the truly needy students receive free quality tuition outside of school.

Patrick said free tuition classes began in 2013, adding that the TLC even provides transport to pick the students up from home – at a squatter area or rented rooms.

Free meals are also provided during the sessions.

He said students are recruited through visits to the squatter areas and rented homes.

“I went personally to the squatter areas, and during my meetings with the parents, I explained to them our motive of helping their children with their education and introducing them to God.

“We use caring as the bridge. I told them we care for them and their children, and that education is the best way out from poverty.”

Patrick said while acknowledging education was the best way to beat the poverty trap, some parents confessed a lack of money as the reason they could not send their children for tuition elsewhere.

Most of the parents and children he talked to said they did not want to be poor for the rest of their lives but they did not know how to break out of the cycle of poverty.

“With the help of God, our ministry wants these parents to be successful in life by helping their children get a good education.

“In fact, many of the present state leaders were helped by the churches. Some got their tertiary education overseas through the assistance of the churches. This is the reason for our ministry’s involvement in education projects,” he explained.

Patrick believes that through proper education, the mindsets of poor parents and students could be changed.

He said there were some parents who still had an inferiority complex because of poverty.

“Changing their negative mindsets and erasing the inferiority complex pose the biggest challenge. They have to be convinced, otherwise they will continue to look down on themselves, limiting their abilities and continuing to keep them poor.”

Patrick said those living in poverty must also be properly guided to live in God’s love and surrender to God, adding that with God, everything is possible.

He revealed that lessons at the TLC focused on tuition and life discipline, and were conducted every Saturday morning.

Tutors are mostly volunteer Christian teachers from the various denominations.

“Initially, we encountered some problems as the students were struggling with the system. But eventually, they got used to it and have caught up with the system,” Patrick said.

He noted that some of the students are very intelligent but had not been serious in their studies before and this was because there was no proper system to build up their study-habits due to the environment they grew up in – slums and rented rooms.

He said for now there are more girls at the TLC, adding that the girls are more focused in their studies.

“Based on the feedback I received from their teachers and parents, most of them (boys and girls taking tuition at TLC) are improving in their studies. Many have also become class and school prefects.”

Patrick said he will continue recruiting needy students for the TLC because he liked to see their lives change for the better.

“I can see a lot of positive changes in these needy students towards their education and Bible knowledge.

“It gives me a sense of satisfaction, and pleases God even more when the poor come to Him,” he said. 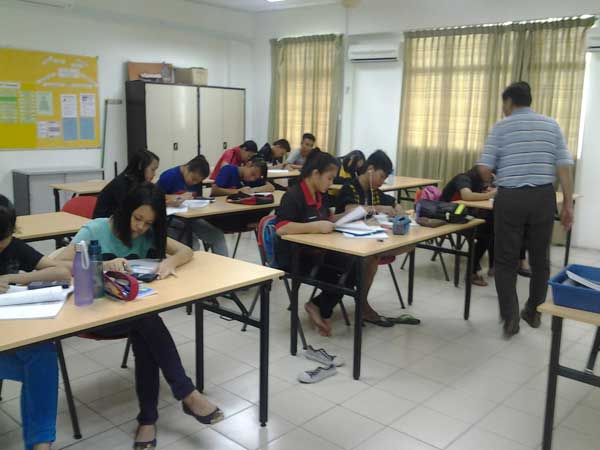 Students do their work under the supervision of a tutor.