Sunday, June 7
You are at:Home»News»Sarawak»Bako, a land of opportunity 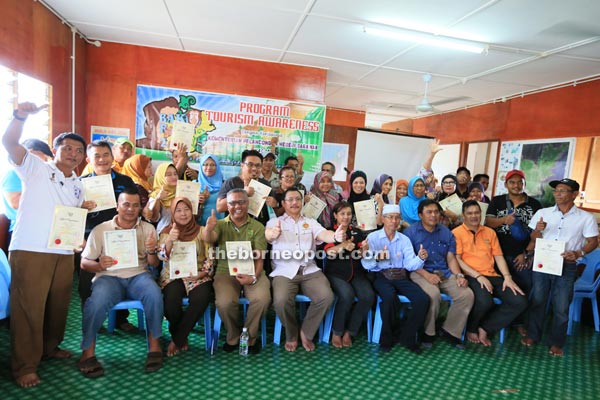 KUCHING: Villagers in Bako are urged to take advantage of their natural surroundings to improve their socio economic standing and contribute to the state’s eco-tourism industry.

Using Bako National Park as the main attraction for domestic and international tourists, the spillover effect from the park has yet to be fully tapped by villagers, said Demak Laut assemblyman Dr Hazland Abang Hipni.

He revealed that the park recorded revenue of RM1.2 million and a total of 47,000 visitors in
2014, which is expected to increase by at least five per cent this year.

“There are ample tourism opportunities and products in this area which is part of the untapped Bako-Buntal bay area,” said Dr Hazland at a press conference after the closing of a tourism awareness course in Kampung Bako Hulu yesterday.

Among the main areas that can be taken advantage of by locals are minute islands such as Pulau Lakei, which is famous for its legends.

Bako, he added, is the only place in Malaysia to have five secluded mini beaches that provide extra privacy to tourists and boasts around 18 nature trials for jungle trekkers.

Renowned as the home of the proboscis monkey, Bako is also home to the rare oriental hornbill and acts as a pit-stop for migratory birds from Europe and Alaska during the month of November each year.

“Tourists will find themselves among 500,000 birds and crocodiles in Bako. We can count at least six crocodiles for every kilometre along the 20km stretch,” he added.

Among the initiatives to encourage local participation in the tourism industry is the Ministry of Tourism’s inaugural Bako Fest 2015 on March 26.

“This festival will be an ongoing event throughout the year and include several programmes related to tourism activities. Most of these programmes will require the active participation of locals,” he added.

The calendar of events under Bako Fest 2015 include Kampung Bako (transit point to Bako National Park) and other known villages in the area such as Pasir Putih and Muara Tebas.

On another note, a bridge linking Bako to Kampung Bako is expected to be constructed some two to three kilometres away from the village in the near future.

Khairol Nizam Naha who represented Kampung Bako youths at the course yesterday disclosed that the village is home to around 4,000 people.

Khairol, who is also a licensed tourist guide, said at least 25 villagers have shown interest in setting up a homestay programme in Kampung Bako Hulu to provide guests a chance to experience living in a fisherman’s village.

Besides fishing, the villagers are active in producing shrimp paste (belacan) and harvesting bamboo clams (ambal) to be sold at the nearby community market.