Sunday, February 23
You are at:Home»News»Sarawak»Legend of Batu Kudik could be tourist draw 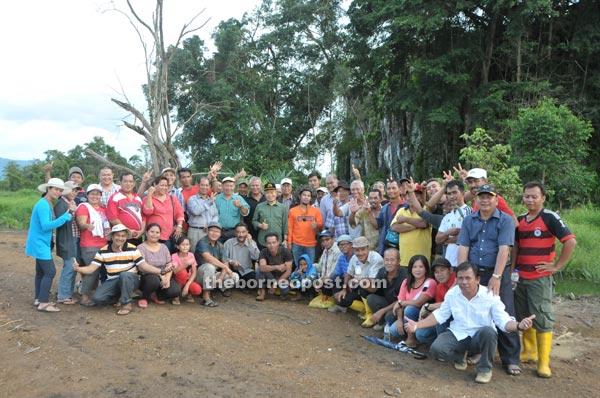 Naroden (standing 15th left) and his entourage are seen at the site. 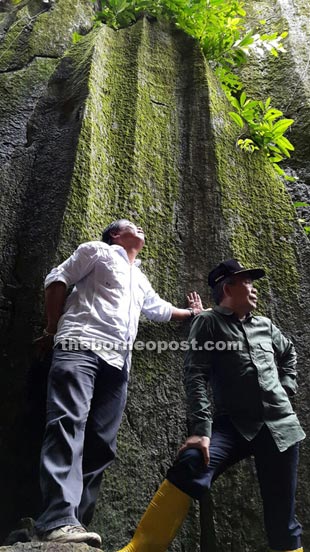 Naroden (right) explores the walls of what is said to be the Batu Kudik longhouse.

Naroden said legend has it that the longhouse was turned to stone several centuries ago by a mysterious old woman and her grandson, who were apparently belittled by the villagers.

“There are interesting tales surrounding this area thus making it a potential destination that could attract visitors and tourists from near and far,” he said in a press release yesterday.

“It can be an interesting camping spot for locals and students as well in the future.”

According to the legend, the mysterious duo had asked food from the villagers during a celebration where much merrymaking and laughter took place.

“However, instead of providing for their needs, the villagers laughed and belittled them. Thereafter, they chased them away.

“Feeling sad and angry, the grandson tied a cloth to a dog’s tail, lit it with a match and let the dog run in pain towards the crowd of drunken people,” related Naroden.

Upon seeing the dog on fire running helter-skelter in pain, the villagers still kept laughing.

“Suddenly, a great bolt of lighting struck their longhouse.”

“To date, no one has ever come up with any concrete facts or knows exactly when or how it actually happened,” he added.

However, he said stories from the elders of the two villages as well as those from Kampung Merbo near Balai Ringin and Gedong were consistent.

“There are sort of signs on the surface of the stone, especially the walls which depict the figure of a human at a glance. On closer inpection, it seems to resemble human features,” he added.

Naroden urged Mohd Khalik to compile more information about the stories from those who know about Batu Kudik.