Sunday, February 23
You are at:Home»News»Sarawak»Marking 70th anniversary of end of WWII 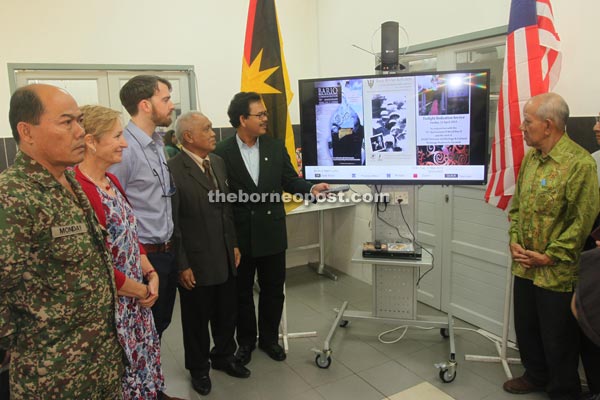 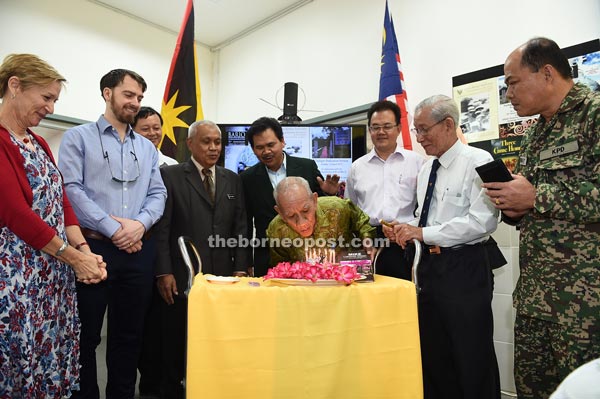 Jeli, 75, blows a candle to celebrate his birthday during the launch. He recalled that he was about four years old when he was sent to the Batu Lintang prisoner-of-war camp. Seen from left are descendants of the Brooke families Jeannine and Jason Brooke, Awang Hambali, Ik Pahon, Lim (second right) and Monday (right).

KUCHING: A host of programmes has been lined up in the state beginning next week to mark the 70th anniversary of the end of World War II.

The calendar of events will begin on Wednesday in Bario with the commemoration of the 1945 landing of Commonwealth forces to mark the beginning of the Borneo liberation from Japanese occupation. Seventy years ago on March 25 at 8.30am, British and Australian commandos led by Major Tom Harrison parachute-landed in the paddy fields of Bario.

Jack Tredrea, the last remaining commando of that mission, will attend the event and soft launch his book entitled ‘Borneo Reflection’.

Veterans from the Australian and New Zealand Army Corps (Anzac) will make a four-day visit to Borneo this year to participate in the ‘Anzac Pan Borneo Commemoration Tour’ by Australian Borneo Exhibition covering Sarawak, Labuan and Sabah (Sandakan). The programme will start on April 12 with a twilight dedication service to be held at the Heroes’ Grave at Jalan Taman Budaya here.

“In 1943, as the Pacific war campaign led by the Americans advanced against the Japanese, the Allied forces planned a counter-insurgency to establish a Borneo Interior Force in Sarawak, Brunei, North Borneo (Sabah) and the Northern Dutch Borneo (Kalimantan) to support the advances of the Australian 9 Division.

“Operation Semut was launched with Borneo Highlands as strategic launching sites. The Borneo operation, spearheaded by Australian Forces, took the surrender of the Japanese across Borneo with Labuan on Sept 10, 1945, followed by Sarawak (Sept 11) and Sandakan (Sept 13).

“STF, in support of the Tourism Ministry, Sarawak Tourism Board (STB) and Tourism Malaysia, organised these events in furtherance of this historical heritage and moments to promote awareness and better understanding of the atrocity and suffering towards attaining the essence of peace,” Lim said during the soft launch of the 70th Anniversary WWII Commemoration events at Batu Lintang Teachers’ Training Institute (IPG) campus here yesterday.

From Aug 1 to 8, the Australian SAS (Special Air Services) will hold their Borneo reunion in Kuching to commemorate the 50th anniversary of the Indonesian Confrontation (1962-1965) in which the SAS took part as member of the Commonwealth Forces together with the Sarawak Rangers and Border Scouts.

“A commemoration will be held at the Heroes’ Grave memorial at 8am on Aug 2 to pay tribute to the unsung heroes who sacrificed and lost their lives to defend the country. It will be followed by a reunion dinner hosted by SAS Associations of Australia in collaboration with the Sarawak Museum and STF,” noted Lim, who was tasked with the responsibility of defending Belaga when newly appointed as a state administrative officer during the incursion.

To mark the historic date of the Japanese surrender in Sarawak, a special commemoration will be held on Sept 11 this year at Batu Lintang WWII Borneo Memorial, with the presence of the families of Brigadier Sir Thomas Charles Eastick and Major General George Wootten.