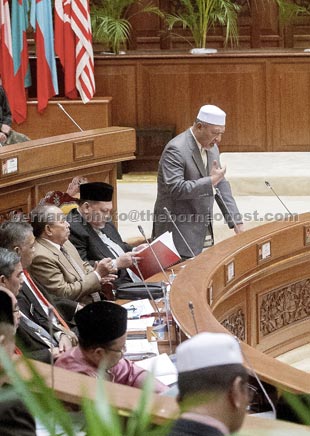 KOTA BAHARU: The Kelantan Legislative Assembly yesterday passed a bill that provides for the application of the hudud laws on Muslims upon its implementation.

The assembly saw history when all the 12 Barisan Nasional (BN) assemblymen from Umno supported the bill which was tabled by Menteri Besar Datuk Ahmad Yakob of the PAS-led state government.

The other assemblymen in the house comprise 31 from PAS and one from PKR, namely Mohamad Roslan Puteh who represents Guchil.

A by-election has been called and polling is on Sunday. The bill was passed after a debate during which four assemblymen spoke. They were Datuk Hassan Mohamood (PAS-Tawang); Datuk Md Alwi Che Ahmad (BN-Kok Lanas); Dr Yusnan Yusof (PAS-Melor) and Datuk Husam Musa (PAS-Salor).

The Syariah Criminal Code II 1993, better known as the hudud, qisas and takzir laws, was not implemented for more than 20 years due to legal constraints.

The initiative of the state government to enforce the laws ran into various controversies, particularly opposition from non-Muslims and the DAP, a partner of PAS in the three-party Pakatan Rakyat opposition pact.

The third partner is PKR.

Yesterday, Gerakan filed an originating summons in the High Court here seeking a declaration of revocation of the 1993 enactment.

Several amendments have been made to the enactment, which is now applicable only to Muslims.

The previous enactment offered non-Muslims a choice of trial under the Syariah law or civil law.

An amendment was also made to Section 15(2) of the code with the addition of a provision for the penalty for takzir for sodomy against the wife.

Amendments were also made to the structure of the sentences to suit the existing law.

As for committing qazaf, the offender could be whipped up to 80 lashes while for liquor consumption, the whipping should not exceed 80 lashes and not less than 40 lashes.

As for apostasy, the offenders must repent within three days and if they refused, they could be sentenced to death.

The bill, which should have been tabled at the State Legislative Assembly last December had to be postponed due to the extraordinary floods which hit Kelantan.