Wednesday, April 1
You are at:Home»Features»Almost zero participation from Borneo states at SEM 2015 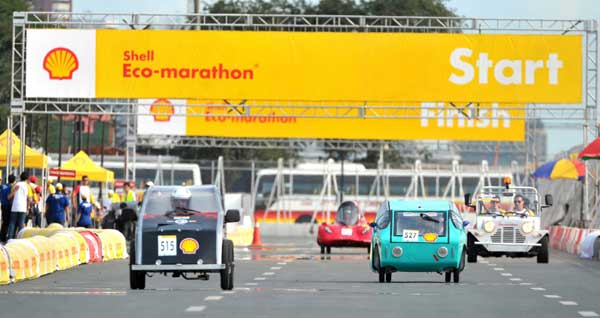 Cars of various shapes and designs compete to achieve the best mileage on one single litre of fuel.

THE recent Shell Eco-marathon (SEM) Asia 2015, held at Luneta Park, Roxas Boulevard in the heart of Manila, capital of the Philippines, had the trappings of a motor racing event with cars of various colours and designs zapping around a specially-designed circuit amidst a cacophony of noise from a cheering crowd.

But it was not a race. Instead, the winning teams were the ones who built fuel efficient cars that could go the furthest using the least amount of energy.

Malaysia fielded 14 teams but representation from the Borneo states was almost zero, with dishearteningly, only one team from Sarawak but none from Sabah.

The sole entrant from Sarawak — Curtin University Sarawak in Miri — which has participated in the competition five times to date, went for the Prototype (Battery Electric) category this year. Although the team did not achieve much success, those involved benefited from the exposure and experience, as well as in promoted the university.

Indonesia’s Politeknik Negeri Pontianak (Polnep) from Kalimantan Barat has a good record in the competition, having won the UrbanConcept (Diesel) last year though failing to defend the title this year.

It is hoped more teams from Sarawak, especially from the state’s technical colleges and skills institutes, will be given the opportunity to join the competition and compete with the best in the region in future.

The Eco-marathon began in 1939 as a friendly bet among Shell scientists in Illinois, US, to see who could drive their cars the furthest on one gallon of fuel.

Since last year, Shell Eco-marathon Asia has been held in Manila, which will continue to host the event until 2016 to mark Shell’s Centenary in the Philippines.

This year’s SEM Asia from Feb 26 to March 1 attracted a record 127 teams from 17 countries, including new entrants from Australia, Bangladesh, Oman and Saudi Arabia. The participants were mostly engineering students from universities, technical institutes and polytechnics from Asia, the Oceania region and even Egypt on the African continent.

These students could have spent one curriculum year, designing and building their cars, and some may be doing it as their final year project submission, with going to SEM Asia being the culmination of their hard work — the blood, toil, tears and sweat they put in to realise their dream.

At this stage, it is not all about fame and the prize money of US$2,000 and US$1,000. For these students, the experience, knowledge and character building will make them more marketable as they enter the job market. 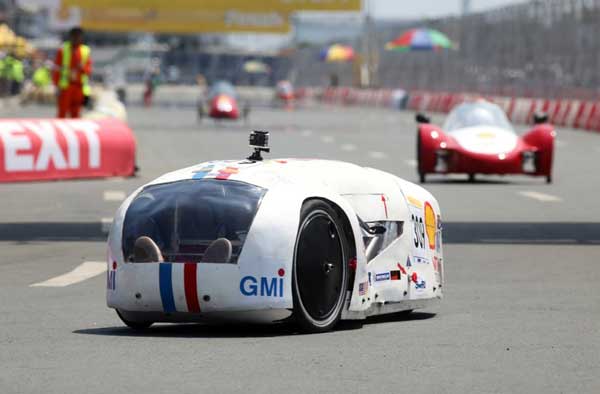 The car from German-Malaysian Institute stays ahead of the pack.

Royal Dutch Shell chief human resource and corporate officer Hugh Mitchell said one of the participating teams would go on to design the car of the future. But most importantly, he added, SEM was more about tapping the potential of youth and growing the pool of talented engineers and scientists.

“Several contestants from the Philippines, Pakistan, Brunei and Singapore have gone on to work for Shell. In 2010, for example, Filipino engineering student Jericho Paolo Rivera’s team won an award for safety and design, and set the first Philippine record for best mileage during the first Shell Eco-marathon Asia.

“Rivera joined Shell a year later to work at the Malampaya natural gas platform, operated by Shell, and at our onshore gas plant at Batangas, the Philippines.

“For Shell, this is more than just smart hiring policy. It represents a broader strategic shift towards Asia where we believe in developing local talent to meet the region’s rising energy needs,” he explained.

SEM technical director Norman Koch also emphasised on how much the competition was benefiting the students.

He said SEM Asia, SEM Europe and SEM Americas annually produced 10,000 motivated and trained engineering students who went into the industry, bringing with them the wealth of knowledge and experience derived from the competition.

“They gained not just technical skills but also character-building from teamwork, and acquiring commercial knowledge. We know many, many teams have offers of appointment in many countries before they even graduate.”

As for the technologies developed from SEM, Koch said Shell was leaving it to the students and their universities and institutes to protect, pattern and market their ideas.

“At Shell, the motor industry is not our business. We do energy, and in SEM, we train the students,” he added. 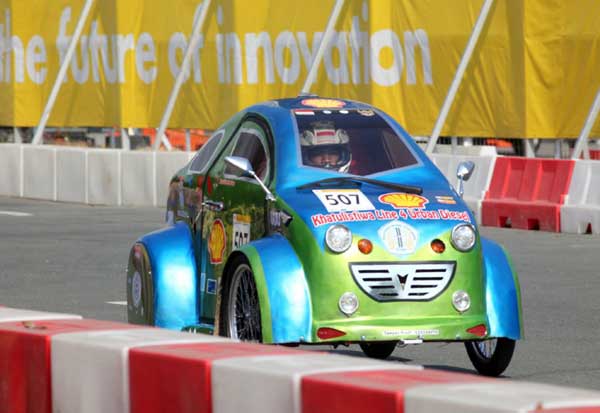