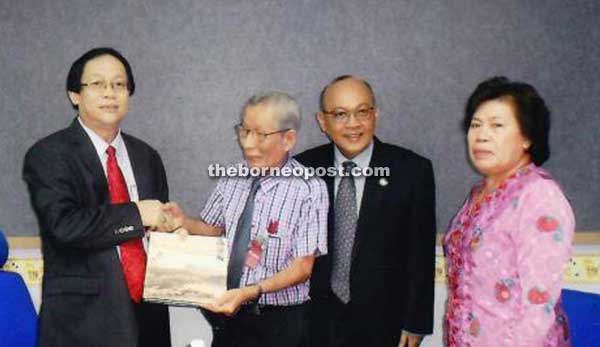 Francis (left) receives the book from Lim as others look on.

KUCHING: Fort Alice has been transformed into a heritage museum after its restoration.

The 150-year-old fort built in 1864 in Sri Aman – then called Simanggang – is a legacy of the white rajahs who ruled Sarawak.

The Sultan of Brunei had ceded the territory of the Batang Layer, Skrang and Saribas rivers to James Brooke in 1853.

Charles moved to Lingga to take over from the Resident who was killed by Iban Warrior Rentap.

A year later (1854), he moved to Skrang and in 1864 established his headquarters at Simanggang, where he started building the fort and the Astana with the help of the local communities.

It was here that Charles held court every morning, administering justice to a string of Iban and Malay litigants and received courtesy calls from Dayaks from the ulu and beyond. Both criminal and civil cases were considered and recorded.

Tuan Muda Charles Brooke’s day finished at eight every night when the fortmen would pull up the drawbridge, hollering up and down the river: “Oh ha, oh ha, oh ha; pukal dilapan tau udah behuni (eight o’ clock has sounded); tangga udah tarek (the bridge is pulled up); pintu udah kunchi (the doors are locked); orang enda tau niki agi-i-i (people are not allowed to come up anymore)”.

When Rajah James Brooke left Sarawak for the last time on Sept 24, 1863, Charles was made his deputy to run Sarawak on his behalf.

On the death of James Brooke, Charles was proclaimed second Sarawak Rajah on Aug 3, 1868. He was sad to leave Simanggang for Kuching.

The Simanggang fort was named Fort Alice after his consort Ranee Margaret Alice.

Author Lili de Windt tells a beautiful story of how in the absence of Charles Brooke, they managed to hold the fort with one canon, a dog and a mate against a flotilla of boats carrying tribal warriors.

The tradition Charles established in Simanggang lived on at Astana Kuching such as the Brooke tradition of firing the canon at Fort Margherita Kuching at eight every night until 1968.

The revival of Fort Alice as Sri Aman Heritage Museum will remind of those days, and be an enduring experience for generations of Sarawakians.

Lim presented a copy of a Brooke era book for display at the museum to Simanggang assemblyman who is also Rural Development and Housing Assistant Minister Datuk Francis Harden Hollis.

It is hoped that this would encourage more people to donate copies of heritage papers, books or artifacts to this heritage museum for the education of future generations.

Donations can be channelled through the director of Sarawak Museum. For more information, the public can call 082-244261.