Wednesday, September 23
You are at:Home»Columns»Quick Chat»Inspiring appreciation for Sarawak’s heritage 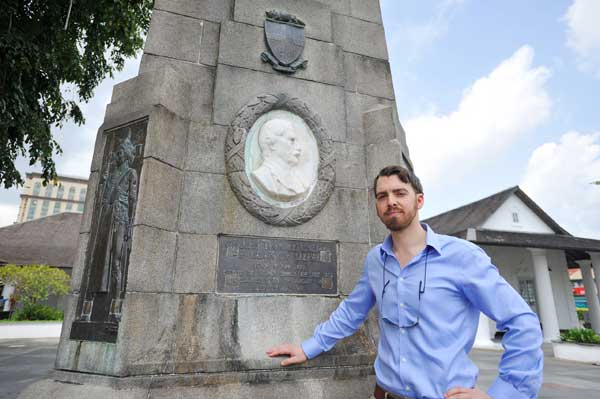 Jason poses with a relief of Charles Brooke etched into a monument at the Old Courthouse.

To say Jason Brooke loves Sarawak is an understatement. The state has been a part of his family for generations; something indelibly etched into his very being.

“I find myself missing Sarawak all the time, even when I’m back home in London,” he admits with a grin when met at a hotel in Kuching last week.

Dressed in a light blue shirt and khaki pants, the soft spoken and affable young gentleman is all smiles as he introduces himself.

As director of The Brooke Trust which he helped found together with his father and brother, the 30-year-old is no stranger to the state after having first set foot here back in 2008.

Since then, he’s made it a habit to visit regularly, contributing tremendously to the heritage preservation effort of his family’s legacy in Sarawak.

In Kuching for a two week stay working with the Sarawak Museum on the Brooke Gallery project at Fort Margherita, Jason took time out of his busy schedule to sit down with thesundaypost to talk about his latest endeavours, the upcoming Hollywood movie on his ancestor Sir James Brooke and his passions.

thesundaypost: You’ve been very busy with The Brooke Trust of late. Could you tell us what is it all about?

Jason Brooke:  I’ve always had a warm regard for Sarawak’s heritage, and feel very strongly about preserving and sharing it. We set up The Brooke Trust for this purpose. Our mission is to inspire appreciation for Sarawak’s unique heritage, which we feel has a relevance to the wider world. Nowhere else could you find such a diversity of culture and beliefs, living in peace with one another and working cohesively together, which I believe could be a lesson for the rest of the world.

Q: What sort of projects have you been involved in?

Jason Brooke: We’ve been actively donating our family’s historical artefacts and archives with the view of making them available to Sarawakians in the future, while working together with Pustaka Negeri and the Malaysian National Archive in Kuala Lumpur to digitize the Brooke records.

Pustaka now has historic records of the first 100 years of Sarawak’s history available for public viewing. Tourism Minister Datuk Amar Abang Johari TunAbangOpeng is very keen on seeing Fort Margherita conserved, and we’ve been working closely with him on that.

The Brooke Gallery there, which is scheduled to open its doors soon, will showcase the family’s archives and make them available to tourists, visitors, youths and students; anyone who’s interested, really. The project is approaching its final leg, and I’m here this time around to work through its final stages. It’s going to be a wonderful showcase.

Q: There’s talk about a feature film, The White Rajah, that’s set here in Sarawak and will tell the story of your ancestor, Sarawak’s first Rajah, Sir James Brooke. As the film’s technical advisor, what can you tell us about it?

Jason Brooke: It’s all very, very exciting. We’re working with Hollywood producers on getting it done, and it’s all going ahead smoothly. We’ve just signed on a top Hollywood director recently, who has worked on a few well-known movies set in Asia, but unfortunately, I can’t tell you his name. Not yet, at least. The reason we got involved was because we saw potential in bringing international attention to Sarawak, with it being such a beautiful place with equally beautiful people and a unique history. When it’s all told in a swashbuckling Hollywood movie, it gets people talking about it, which will hopefully lead them into coming here to learn more. 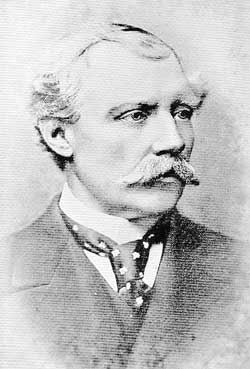 Q: That’s certainly something to look forward to. When can we expect to see it?

Jason Brooke: Filming will take place in Sarawak, even though it wasn’t economical for the filmmakers to do so, but they’ve insisted on making it as authentic and as accurate as possible. After 12 weeks of filming here and some post production work, we’re hoping to premier the film at the Cannes Film Festival in 2017. The film will focus on James’ life as he first arrives in Sarawak and his exploits here, before handing over power to Charles Brooke.

Q: How is work coming along on the Brooke Gallery that will be housed in Fort Margherita?

Jason Brooke: The state government and the museum have really gotten behind this project, and they’re working closely with us to try to make this a gallery that complements the rest of Sarawak’s museums, in terms of their offerings and huge potential. With the gallery, we’ll get to focus on different aspects of Sarawak with an in-depth look at the Brooke era that focuses on how they interacted with the locals, and the part locals played in history. There’s just so many things to explore, from how the structures of government were put in place to the incorporation of native adats, laws and customs. The introduction to the gallery will explore the allure and attraction of Sarawak, ever since the dawn of time. The ancient Buddhist and Hindu empires, the Brunei Sultanate, the European explorers in the 15th century, why James Brooke chose to come here, the creation of the state, the Japanese Occupation and the formation of Malaysia; the gallery will be very comprehensive.

Q: What are some of the key pieces visitors can expect to see in the gallery, and when does the gallery open?

Jason Brooke: There will be an original copy of the anthem of the then Kingdom of Sarawak, Gone Forth Beyond the Sea, which was composed by Ranee Margaret Brooke. Besides that, there will also be a vast collection of family artefacts, such as beautiful busts of Charles and James Brooke, swords, the currency of that era and other colonial anthems. What we’ve done is identify key evocative objects for each of the pivotal events in Sarawak’s history, such as the inkwell the last Rajah used when he ceded Sarawak to the British government. We’ve set September as a tentative date for the opening of the gallery.

Q: You mentioned working with Pustaka Negeri. Could you tell us more about it?

Jason Brooke: Pustaka’s been a wonderful custodian of Sarawak’s written heritage, with detailed archives and its vast state record depository. They also run engaging programmes for school groups on the state’s history, which I feel is a hugely important role. They have wonderful facilities, and their staff are very keen on the work they do. We’ve been collaborating with them for a few years now — digitizing the family’s records and making it available to a wider audience globally by making things easily searchable, accessible and relevant. We’ve also worked with them on exhibitions in the past, such as one such exhibition on my grandfather, Rajah Muda Anthony Brooke. I’ll also be presenting one of James Brooke’s historical books from 1821 to Pustaka while I’m here. 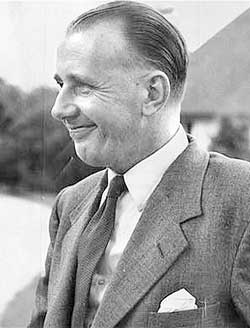 Rajah Muda Anthony Brooke, heir apparent to the Raj before Sarawak was ceded as a British Crown Colony.

Q: You first visited Sarawak in 2008, when you were 23. How has your opinion of Sarawak changed since then, if it has at all?

Jason Brooke: It has evolved somewhat, as I’ve come to appreciate it on a much deeper level. When I first came here at 23, just out of university, I read all the history books I could about James Brooke, and was inspired by the stories of adventure and of the diverse indigenous cultures here. But the thing was, I didn’t know its people.

It was only after coming here and getting to know the people first hand, their views on the Brooke era, their ancestors’ relationship with the state in the early years; I took such energy, such encouragement from that. In the position I’m in, I felt that I needed to share something, to give back and to serve Sarawak in some way, which is why I’m here today.

Q: Let’s talk about your passion: boating. We understand you’re a big fan of it. What are your thoughts on the Sarawak Regatta?

very passionate about it. I was Captain of the Boats in my university’s Boat Club in 2007

I think it’s wonderful that the

state has kept up this event that traces its origins back to the 1870s.

It’s symbolic of people giving up violence and coming to race out their differences on the river. I’m very supportive of the Regatta. I’m actually hoping to meet the crew that won the title of Raja Sungai last year, and to give them some encouragement for this year’s race.

Q: Have you ever thought about joining them for a race?

Jason Brooke: *laughs* Well, then I’d have to do a bit of training and read up on the competition. Maybe go for a spin on the boat and see how she flows before I do.

Q: As a prominent representative of the Brooke family, how does it feel to be in the state founded by your ancestor?

Jason Brooke: Sarawak is one of these places that welcomes all visitors very warmly. It’s a great privilege for me to be a focal point for the Brooke’s part in Sarawak’s identity. It’s quite an emotional thing, and it’s become a very important part of my own life. It’s something I have the privilege of doing.

Q: What do you do in your spare time, back home in London?

Jason Brooke: I end up missing Sarawak! It’s true. I wish I could spend more time here. I can’t help but feel it’s an integral part of my identity. I do work in the British Museum and thankfully, it’s helped introduce partnerships between the British Museum and the Sarawak Museum department, sharing expertise between the two institutions, just like back in 1890. It’s like being a link between two worlds.

Q: Local food is sort of a big thing among the people of Kuching. Which is your favourite?

Jason Brooke: I have a weakness for the local jungle fern, midin. Street food is great as well, and I love satay. To get to know a culture, you have to try their food. That’s another thing I end up missing when I’m in London. The bland food we get there just makes me long for Sarawak even more. 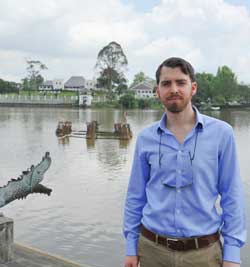 Q: What’s your view on Sarawakians and their appreciation of history?

Jason Brooke: There are a surprising amount of young people interested in Sarawak’s history. Take people in the UK, for example, who were surprised that I, at a relatively young age, would be interested in history of any sort.

In Sarawak, there are so many young people who just want to learn more. Once you really understand your roots, your heritage, your ancestors’ role in history was, you feel you have a stake in society, and I think that recognition is important. We don’t do it well enough in Europe, but Sarawak can be a great example of that. Our projects can hopefully go some small ways towards supporting this feeling of appreciation of one’s roots and heritage.

Q: Is there anything else you’d like to add for our readers?

Jason Brooke: It’s been very inspiring working together with people who have experienced Brooke rule and colonial rule, and I’m very thankful for all the support given to us by the government and the people here.

People look at Brooke rule, and it’s all very romantic and swashbuckling, but you have to remember, the Brookes were just a handful of people among a population of half-a-million. It was the people of Sarawak who really made it work, embracing what then was an unconventional form of government and working together to create the unique state that we know today.

The trust has many, many more exciting projects in store for the future, and I get plenty of new ideas every time I visit, so please, look forward to that.