Monday, May 23
You are at:Home»News»Sabah»Ex-Aussie soldier donates historical items to Keningau Museum 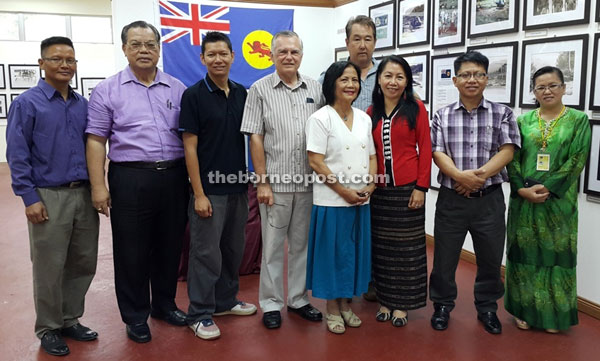 What used to be a rest house 50 years ago has been turned into a local museum that houses numerous historical collections dating back to the colonial days ranging from artefacts and old photographs.

The couple’s visit to the museum was to donate old photographs and an Australia Army Slouch hat that would become part of the exhibition here.

Flash back to late 1965, Tomasz was a young second lieutenant of the transport troops, and a member of the 21st Construction Squadron of the Royal Australia Engineers that was building a road network between Keningau and Sapulut during the Indonesian Confrontation.

He was put in charge at the Keningau Base Camp to make sure supplies and equipment were running smoothly between the railhead from Tenom to Pandewan, a forward base camp set up just a few miles off Sapulut.

After Malaysia was formed on September 16, 1963 through the union of Malaya, Singapore, Sarawak and Sabah (then North Borneo), Indonesia then under the leadership of Sukarno, launched an armed insurgency to destabilise the newly formed federation.

In response to the threat, the Australian government sent the Royal Australian Engineers to Sabah as part of its military aid to protect the sovereignty of the State against the aggressors.

Their task was to build a road between Keningau and Sapulut, which was very close to the Indonesian border.

Fifty years since the Confrontation ended, Tomasz and his wife, Connie, had been visiting Keningau frequently. This was due to the fond memories Tomasz had while servicing his tour of duty for six months in the Interior of Sabah back in 1965-1966.

He remembered the friendly Muruts he encountered and their magnificent hospitality. As Tomasz reminisced his younger days in Sabah, he remembered vividly in 1966 while driving back to Keningau from Pandewan, a lone Murut was walking carrying a huge watermelon on the road the Squadron was constructing.

Knowing the journey would take the Murut days to reach Keningau, he decided to give him a ride in his Land Rover. Upon dropping off his passenger next to the field, the Murut, out of gratitude, decided to give his watermelon to Tomasz. Those were among the memories he cherished and still remembered until today.

During a simple presentation at the museum, Tomasz handed the Slouch Hat to State Museum director Joanna Kitingan.

The event was witnessed by local dignitaries, among them the president of Sze Yi Association of Keningau, Peter Ma, Pastor Waddin Simon Musalim of the Keningau Seventh-day Adventist Church, Andrew Lin, who runs a Shell petrol station where the Australians used to get their consignment fuel from, and Abednigo Chow, a local historian and author of the upcoming history book soon to be published entitled “Keningau: Heritage and Legacy in the Interior Residency”.