Saturday, December 3
You are at:Home»World»The crash of Germanwings Flight 4U 9525 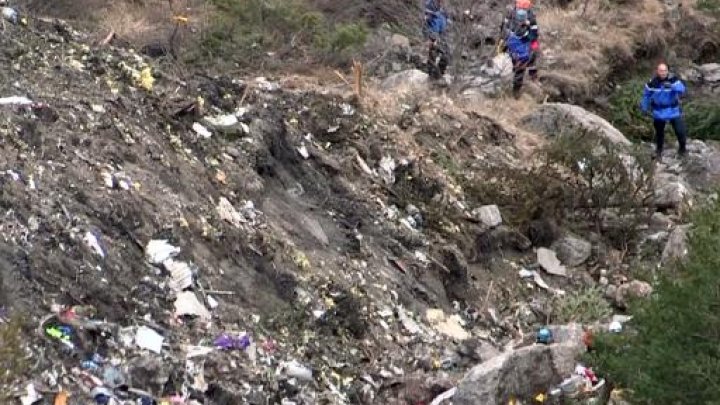 A screengrab taken on March 24, 2015 shows search and rescue personnel at the crash site of the Germanwings Airbus A320 in the French Alps, above the southeastern town of Seyne -© AFP

PARIS: A German budget airliner crashed in the French Alps on Tuesday with all 150 people on board declared dead, in one of the worst air crashes in France in 40 years.

Here is a timeline of developments:

– As it flies over southeastern France the French civil aviation authority DGAC declares that the plane is “in distress” at 10:47 am. The aircraft does not send out a Mayday signal, and the DGAC does not receive any radar signals from the plane or have any contact with the flight crew.

– After plunging for eight minutes, according to Germanwings, the plane crashes at 1,500 metres (4,900 feet) altitude in a difficult mountainous terrain.

– France’s interior ministry announces the crash in the Alpine region of Barcelonnette. The ministry says that 148 people were on board.

– A major rescue operation is mounted, but very quickly French President Francois Hollande says: “There are not thought to be any survivors”.

– Junior transport minister Alain Vidalies says there are no survivors and that the plane “crashed in the Estrop range”.

“It’s an area that is snowbound, inaccessible to (ground) vehicles, but which could be overflown by helicopters,” he says.

– Revising the toll upwards, Germanwings says that the aircraft was carrying 150 people.

– The area where the crash took place is sealed off to help the probe.

– French Prime Minister Manuel Valls says that the authorities “can’t rule out any theory” on the cause of the disaster.

– Germanwings says its jet underwent a thorough check in the summer of 2013. It says that 67 Germans were on board, of which 16 schoolchildren returning from an exchange holiday. Government spokesman Soraya Saenz de Santamaria says that 45 of the victims had Spanish surnames.