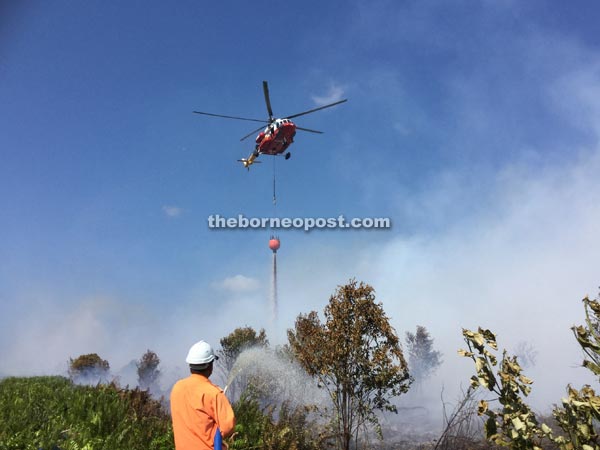 Voluntary fire fighting unit of Naim Cendera doing their bit on the ground as firemen use a helicopter to water bomb peat swamp fires in Permyjaya.

MIRI: More than a 100,000 people living near ILP Miri and in Tudan have been gasping for fresh air for the past two weeks as thick smoke and heat from a nearby peat swamp fire continue to burn unabated.

As fire-fighters take to the air and land to douse the flames and housing developer Naim Cendera Bhd deployed 10 excavators to create fire breaks and raise water table, green grasses have turned yellow and the Air Pollutant Index fluctuates at unhealthy levels – depending on wind conditions.

It has not rained in Miri for weeks. There was a light drizzle yesterday, but at the wrong ‘place’.

The drizzle was near Miri by-pass, which is nowhere near Tudan and neighbouring Permyjaya – where ILP Miri is located.

The contractor of the greening project in Marina Park City, for instance, has been watering the newly planted plants daily in the past few days.

The haze has also caused a spike in respiratory ailment cases, including asthma, in the city.

Compounding to the problem were sporadic outbreaks of bush fires elsewhere in the city. For instance, peat swamp fire razed some eight acres opposite Lopeng fire station on Tuesday.

There was another hotspot near a cement factory at Batu Satu Kuala Baram Road on Tuesday afternoon, too.

Mire fire chief, Law Poh Kiong, said yesterday that another hotspot had been detected near the banks of Baram River, near Asean Bridge.

A team has been rushed there, but Law is praying for a helping hand from nature to stop the people’s miseries effectively.

Niam Cendera’s in-house fire-fighting unit has been working hard in the past two weeks to help douse the fires by creating fire breaks, including behind Peryatim Hamidah Orphanage (in Permyjaya), and channelling water into the affected areas.

About 100 firemen from Miri Fire and Rescue Department are not only fighting the flames from the ground, but are also using a MII 7 helicopter to water bomb hotspots, especially at ILP Miri and Tudan.

The fires are believed to have been caused by farmers, and it spread rapidly and caused densely populated areas to be blanketed by haze and burnt debris.

The firemen believed they had gained the upper hand in Permyjaya after battling the fires for two weeks, but they are worried the prolonged dry spell might trigger fires elsewhere.