Thursday, April 9
You are at:Home»News»Sarawak»Superstar Jackie Chan to appear at Aiffa ‘15 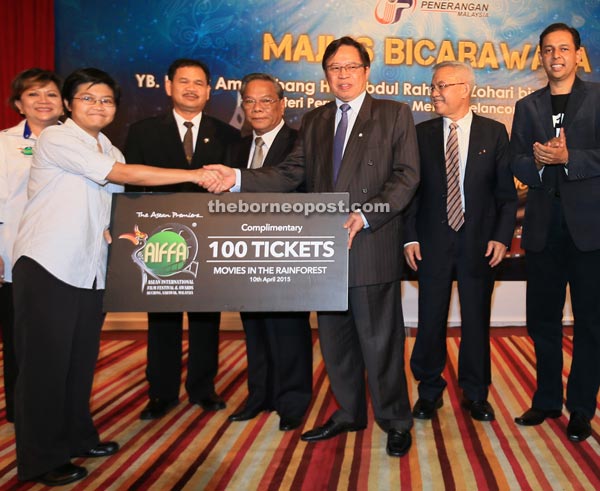 KUCHING: International superstar Datuk Jackie Chan will be making a guest appearance at the Asean International Film Festival and Awards (Aiffa) 2015 here from April 9 to 11.

He will join a star-studded line-up that includes some of the region’s best names in the film and entertainment industry, as well as industry players from China and South Korea.

Further details about Chan’s appearance will be released by Aiffa organisers at a later date.

Tourism Minister Datuk Amar Abang Johari Tun Openg, in making the announcement at a luncheon talk with the media yesterday, said a glamorous and prestigious event like Aiffa was bound to benefit not only the state but the region as a whole.

“Entertainment can break down political tensions and differences. It transcends borders to help in developing closer social ties and forging greater unity among nations.

“If such ties are established and trust is built, the economic benefits such as better connectivity and communications will follow,” he said.

Abang Johari said Aiffa was a good platform to make Sarawak known to the world.

“Film is an effective tool to promote cultures and influence lifestyles. Our new approach is to promote our local cultures through film.

“Films that depict local cultures can make Sarawak known to the world. It is our long-term vision and as Sarawak has the potential, we have to start somewhere. Aiffa is a good place to start as Kuching is the permanent venue for the event,” he said.

Abang Johari was also optimistic of the participation from the region, particularly from film-makers.

“For the first time, all 10 Asean nations have sent in their films for consideration. So we are looking at a very big event that brings the industry’s best to Kuching,” he said.

“Aiffa will be able to create a more known image of Sarawak that is not only a beautiful tourist destination, but also a natural studio, ideal as a filming location for international films.

“It is a big responsibility to host such an event but Sarawakians are lucky to have the opportunity to see regional and international celebrities coming here for the event,” he said.

For more information about Aiffa 2015, its programmes and ticketing, visit www.aiffa2015.com.