Sunday, May 22
You are at:Home»World»Air Canada plane crash lands at Halifax airport, 23 injured 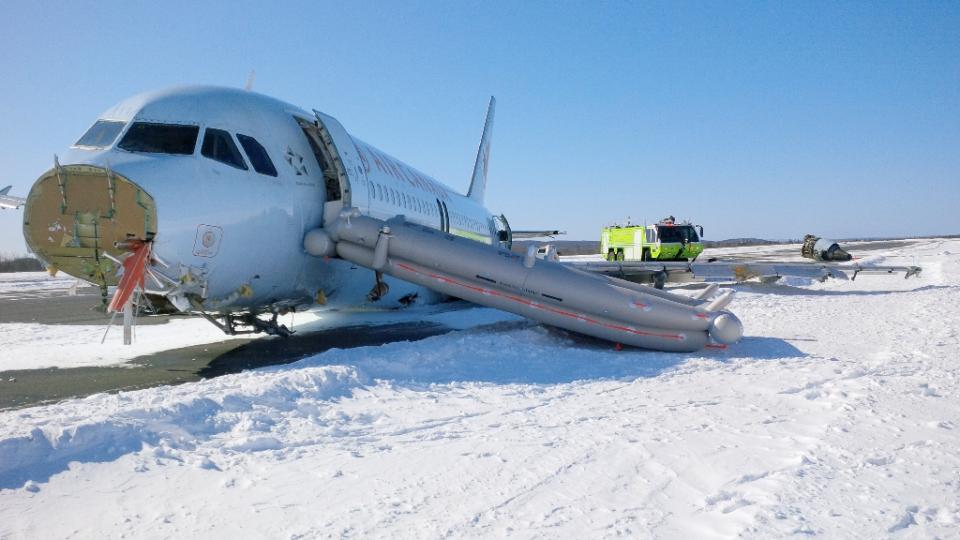 Handout photo by the Canada Transportation Safety Board shows damage to an Air Canada Airbus A-320 that skidded off the runway at Halifax International Airport in Halifax, Nova Scotia, March 29, 2015 -AFP Photo

MONTREAL: Twenty-three people were injured when an Air Canada jet struck an antenna and crash landed as it attempted to touch down in heavy snow at Halifax airport early Sunday.

All but one of the injured were later released from hospital following the incident, which came just five days after a pilot killed himself and 149 others when he slammed his Germanwings plane into the French Alps.

Like the doomed Germanwings flight, the Air Canada plane involved in Sunday’s incident was an Airbus A320.

Flight AC624 from Toronto “exited runway upon landing at Halifax,” the airline said on Twitter, and pictures showed the nose of the plane sliced off, its landing gear collapsed and at least one engine badly mangled.

Passengers said the plane had circled over the airport before coming in to land and had “bounced” upon impact, shortly after midnight.

Investigators were probing what caused the incident, but heavy snow was falling in the eastern Canadian city and Environment Canada had issued a snowfall alert, warning of low visibility.

Transportation Safety Board investigator Mike Cunningham told a press conference the plane had struck an antenna array approximately 350 meters (1,150 feet) before the start of the runway.

The collision caused “significant damages to the aircraft,” he said, ripping off the landing gear.

Five crew and 133 passengers were on board the plane, according to Air Canada.

“There was a couple people, all bloodied. Everybody was able to get out, but what was worse was that they left us for an hour outside in the blowing snow,” Lianne Clark told the Canadian Broadcasting Corporation.

Some ran from the plane “because the fuel was coming out and we were scared,” she said.

Halifax airport spokesman Peter Spurway said passengers had appeared shaken as they left the plane, describing the incident as “scary.”

Power was out at the airport at the time of the incident, but it was unclear whether there was an impact on the situation.

Back-up generators were running when the flight landed and the runways were lit, he added.

Both runways were closed overnight but the airport was slowly returning to normal early Sunday.

Images showed the aircraft sitting on the airfield with its badly damaged nose as thick snow covered the ground.

Spurway reported the damage as “extensive” and said at least one emergency chute had opened.

“We at Air Canada are greatly relieved that no one was critically injured,” said Klaus Goersch, executive vice president and chief operating officer of Air Canada.

“Yet we fully appreciate this has been a very unsettling experience for our customers and their families, as well as our employees, and we are focused on caring for all those affected.” -AFP