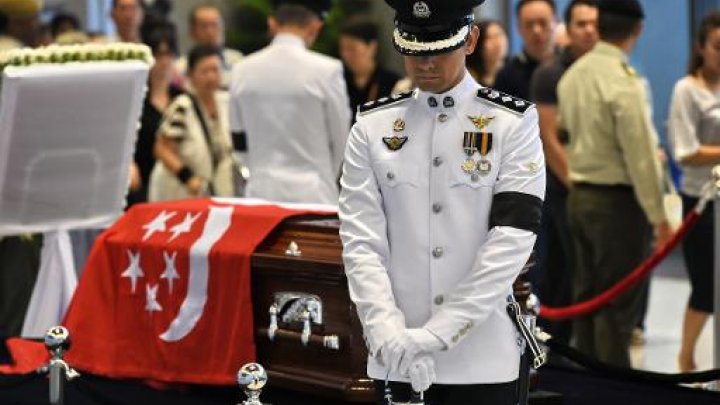 A Singapore policeman holds his post as mourners pay their respects to Singapore’s late former prime minister Lee Kuan Yew as he lies in state at Parliament House ahead of his funeral on March 26, 2015 -© AFP

SINGAPORE: Singapore police said Monday they have arrested a teenage boy who posted an expletive-laden video on YouTube attacking Christianity and the country’s late founding leader Lee Kuan Yew, but the exact charges were unclear.

“In response to media queries, the police confirm that a 17-year-old male Singaporean was arrested in relation to the case. Police investigations are ongoing,” a Singapore Police Force statement said late Monday, without providing further details.

Singapore’s Straits Times and other local media said the young man, described as Amos Yee, a 17-year-old student, was arrested on Sunday.

In an eight-minute long video titled “Lee Kuan Yew is finally dead” Yee launched a scathing attack on the 91-year-old political patriarch who was cremated after a state funeral Sunday.

In the video, Yee also likened the city-state’s first prime minister to Jesus Christ as he launched a tirade against Christianity.

Under Singapore law, a person who incites religious and racial hatred can be charged with sedition, punishable by up to three years in jail and a fine.

“Lee Kuan Yew was a horrible person… everyone is scared, everyone is afraid that if they say something like that they might get into trouble,” Yee said on the video.

The Straits Times newspaper said at least 20 police reports — public complaints asking for an investigation — have been lodged against Yee since Friday, when he was believed to have uploaded the video.

It has been taken down from his YouTube page but others have reproduced it in part or in full.

Lee, credited with laying the foundations for Singapore’s prosperity as prime minister from 1959 to 1990, was given a hero’s sendoff Sunday, with more than 100,000 people lining the streets for his casket’s final procession despite torrential rain.

Lee was revered by citizens for Singapore’s prosperity and social stability but also criticised by rights groups for entrenching a system that called for one dominant political party, the muzzling of the press and curbing political liberties.

Singaporeans who openly questioned Lee’s record and scoffed at the emotional reaction of many to his death have been attacked in social media by his supporters.

Alfian Sa’at, a prominent playwright and poet known for his dissenting political opinions, called for greater tolerance for contrary views after Lee’s death.

“I do not doubt the sincerity, authenticity, or the depth of feeling of those who were mourning,” Alfian said in a Facebook post.

“But I ask that we also consider the no less sincere or authentic, no less profound feelings of fellow Singaporeans who are a lot more ambivalent,” he added.

The government says 454,687 people — in a nation with just 3.34 million citizens — had paid their last respects to Lee before his public wake ended in parliament on Saturday. -AFP

Previous ArticleOrangutan conservation envoy to protect turtles
Next Article Lion’s Club to carry out RM15,000 worth of outreach projects