Sunday, September 20
You are at:Home»News»Sarawak»Fishmonger sent to the gallows for murder of British medical students 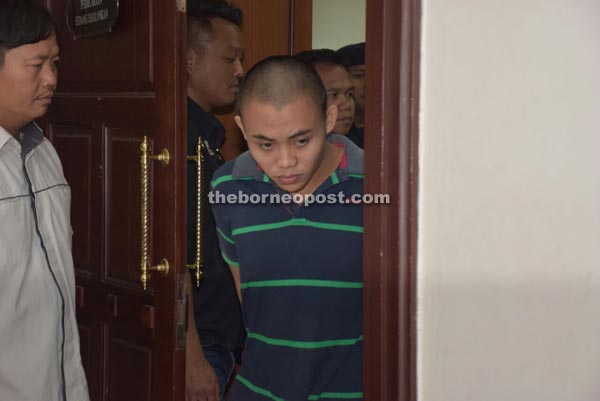 Zulkipli walks out of the court room after the sentencing.

KUCHING: A fishmonger was sent to the gallows by the High Court here yesterday for the murder of two British medical students.

Justice Soo Chew Ho handed down the sentence on Zulkipli Abdullah from Kampung Gersik in Petra Jaya after finding him guilty of stabbing Neil Dalton and Aidan Brunger, both 22, in front of a budget hotel at Jalan Abell between 4.10am and 4.15am on Aug 6, 2014.

The 24-year-old fishmonger was convicted of two charges framed under Section 302 of the Penal Code which provides the mandatory death sentence upon conviction.

He appeared expressionless when the judge ordered him to be hanged until dead for the offences.

The judge ruled that the defence had failed to cast reasonable doubt on the prosecution’s case against him.

Among others, he said the statement made by the accused during the defence call was unreliable, not corroborated and therefore not credible.

A total of 22 witnesses were called by the prosecution to establish their case.

Aidan’s father Paul Brunger who was also present at the court yesterday gave a joint impact statement with late Neil’s parents at the witness dock after the delivery of sentence.

The victims were found sprawling on the road roughly 20 metres apart from each other in the early hours of Aug 6 last year.

They had arrived in the city on June of that year for their internship and were due to fly home hours prior to the tragedy.

A total of five men were detained in connection with the case but four of them were released on police bail and turned into key witnesses.

Simon Siah of Baru Bian Advocates and Solicitors held a watching brief for the victims’ families.

On Jan 6 this year, the court ruled that there was a prima facie case against Zulkipli who entered his defence by giving an unsworn statement.

The defence did not call any other witness except the accused.

The high-profile case has attracted international media attention. Many Sarawakians also held vigil several nights after the murder to pay their last respects to Neil and Aidan.

Paul Brunger, together with Phil and Jan Dalton, parents of Neil Dalton, yesterday read a joint statement in paying tribute to their sons.

Paul said he was devastated after learning about the death of their son and Neil. Their lives had since been shattered.

“They were two exceptional young men full of promises, funny and full of life. Their deaths have left their families and many good friends utterly devastated.

“Our sons would soon have qualified as doctors. Their unprovoked and senseless murders as they were walking home after a night out with other medical students meant that they would never have the chance to spend their lives caring for and helping others.

“They would have given so much to the world. We are so proud of both of them and in what they achieved in their all too short lives.”

“Although we are pleased that the man responsible for their murders has been held accountable, the guilty verdict does not bring our sons back.”