Monday, January 30
You are at:Home»News»Nation»Pattani shaken by four simultaneous bomb blasts, one badly injured
For the freshest news, join The Borneo Post's Telegram Channel and The Borneo Post on Newswav. 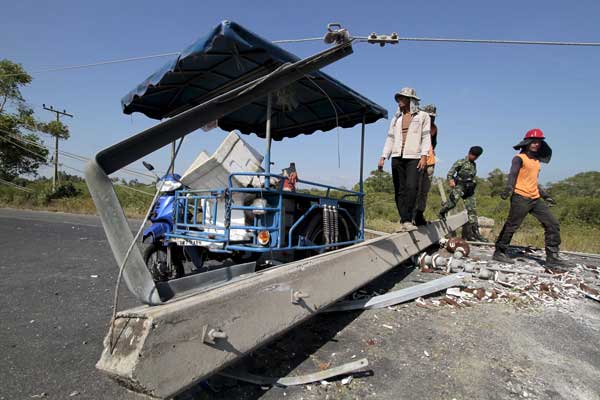 Workers and a soldier walk over a damaged power pole that was brought down in an explosion in Pattani. — Reuters photo

PATTANI, Southern Thailand: Pattani was shaken by four bomb explosions yesterday that left one person badly injured, indicating much remained to be done for lasting peace in southern Thailand.

Muang Pattani District Police chief Pol Col Kirati Waeyusuf said the explosions occurred simultaneously at 2am in this town, the targets being business premises and a source of electricity supply.

The explosions came just hours after the government of Prime Minister Gen Prayuth Chan-Ocha lifted martial law and enforced Article 44 of the interim constitution which empowers the head of the National Security Council for Peace and Order (NCPO) to issue orders. Gen Prayuth is the NCPO chief.

The first of the bombs went off in front of the Isuzu Pattani showroom, shattering the glass panel and damaging three new cars, according to the

The second bomb exploded in front of a motorcycle showroom, about 30 metres away from the area where the first blast occurred. It damaged a car and five motorcycles. The third bomb went off in front of a liquor shop in Jalan Yarang, shattering a glass window and damaging a car and three adjacent houses.

The fourth bomb exploded beside an electric pole, felling five electric poles and cutting off power supply to the town for 30 minutes.

A man was badly injured when the motorcycle he was riding struck an electric pole, police said. Police believe that the suspects who set off the bombs numbered not less than 10.

They said the security forces had tightened security in the town, particularly in the economic zone. — Bernama