Saturday, October 8
You are at:Home»News»Sarawak»Blackbox of ill-fated helicopter found 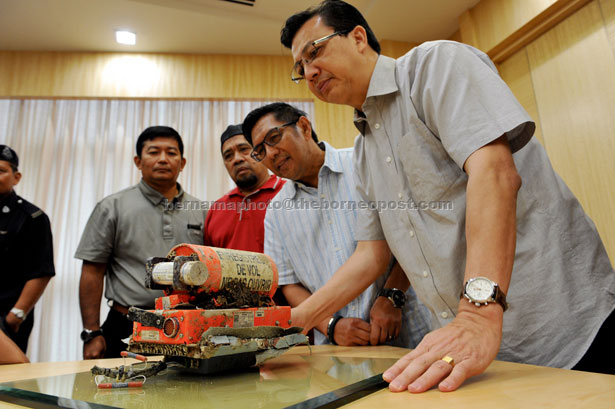 Liow (right) and Azharuddin (second right) take a closer look at the black box from the ill-fated helicopter after it was retrieved from the prime wreckage location. — Bernama photo

SEMENYIH: The blackbox of the helicopter that crashed here on Saturday was retrieved from the prime wreckage location at 11.30am yesterday.

Selangor Police chief Datuk Abdul Samah Mat said the blackbox was in good condition and had been handed over to the Department of Civil Aviation’s special investigation team.

“It is kept in a special secure room for the DCA team to do their analysis,” he told reporters at the crash site in Kampung Sungai Pening, here.

Other than the blackbox, Abdul Samah said so far, the police’s forensic team and DCA special investigation team had found stomach contents believed to be from human beings, dentures, luggage and several other personal belongings.

He said the search radius for now was 500 metres from the location of the prime wreckage and if needed, the team will expand it further until they were satisfied with the gathering of evidence.

“Our main challenge is the hilly terrain. The investigation will take some time but anyhow we will do all we can until we are fully satisfied that we have gathered all the evidence we (police and DCA) need,” he said.

Meanwhile, Transport Minister Datuk Seri Liow Ting Lai said the ill-fated helicopter did not make any distress call and followed the approved flight path. He said the Air Traffic Control (ATC) did not record any conversation with the pilot and that was normal.

“It is normal (helicopter) to fly after receiving the clearance unless it needs any requirement (to call ATC),” he told a news conference here yesterday after the retrieved ill-fated helicopter’s black box was handed to the ministry.

“We also checked whether there was a mayday call or distress call but we can’t find any,” he said.

“He has been flying aircraft since 2002 totalling nearly 13 years of flying experience,” he said.

Liow said the aircraft had a valid certificate of airworthiness under Private Category, which was last renewed on Feb 13 this year and valid until Feb 8 next year. Manufactured by Airbus Helicopters, formely known as Eurocopter France, the aircraft was made in 1990 and was 25 years old as of April this year, he said.

The aircraft maintenance was carried out by Airbus Helicopters Malaysia Sdn Bhd and the last recorded inspection was made on Jan 29 this year, while the flight test was conducted on Feb 9.

“The aircraft has a clean bill of health,” he said.

Liow said the ministry had set up an investigation team, headed by Datuk Yahya Abdul Rahman, a very experienced investigator with more than 20 years’ experience in helicopter accident investigations.

The team would have four members while an accredited representative from France would also be invited as the country was the state of design and manufacturer of the aircraft and engine, he said. Liow said the black box of the ill-fated aircraft that was retrieved would be sent to the Air Accident Investigation Bureau (AAIB) in Farnborough, United Kingdom for a thorough analysis to determine the cause of tragedy.

“We need time to withdraw the (black box) data and also time to analyse the data,” he said, adding that it might take about three days to extract the data and another week to analyse them.

“We are committed in finding the reasons of the accident,” he said. The helicopter carrying six people crashed in a rubber plantation in Semenyih at 4.55pm yesterday.

Department of Civil Aviation Director-General Datuk Azharuddin Abdul Rahman said Baizieva was not the co-pilot of the ill-fated aircraft as the helicopter did not need an assistant.

He said this was a time of sorrow and people should not do anything that could hurt the feelings of family members of the victims of the tragedy.

“Do not engage in speculation, we must show respect to the families of victims,” he said when met by reporters outside the house of the late Jamaluddin.

Ahmad Zahid was asked about speculation started by an online media, claiming that there was a possibility the helicopter was sabotaged.

Ahmad Zahid said the area where the helicopter crashed, has been completely secured by the police force to ensure the process of collecting evidence would be done smoothly. — Bernama