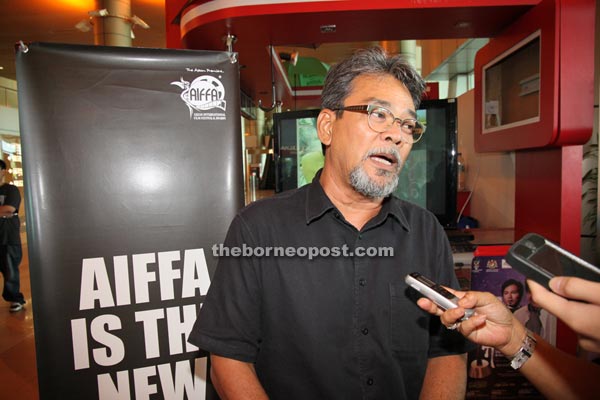 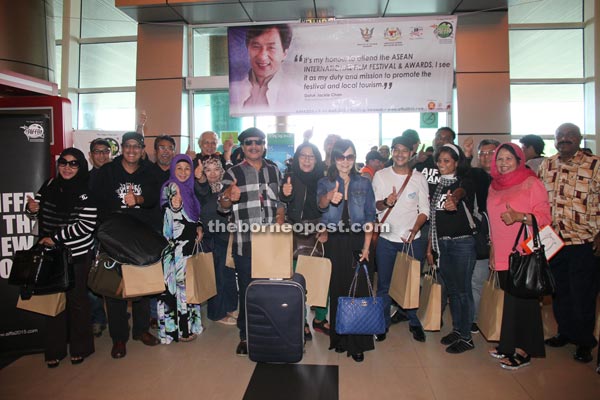 Some of the Malaysian delegates give the thumbsup for Aiffa. 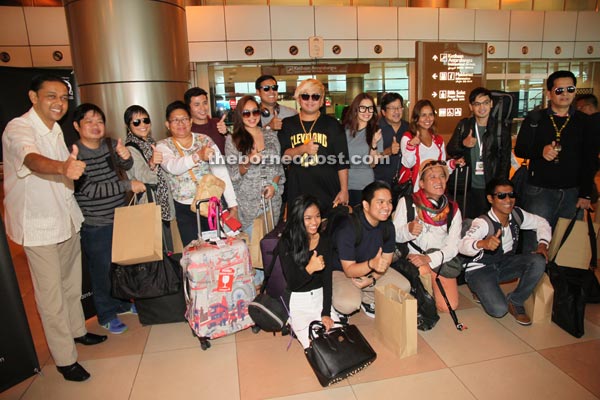 The delegates from the Philippines capture a moment for remembrance upon their arrival at the Kuching International Airport.

Looks of realisation dawned upon other passengers as they walked out of the arrival hall and saw large banners advertising Aiffa, making them realise that they might have shared a plane with an actor or actress.

The Borneo Post had the opportunity to get a quick word from two of the delegates, Nur Fazura Sharifuddin as well as actor Hafizuddin Fadzil.

“This is not my first time in Kuching, as this is my second time coming to Aiffa, and I am very excited to meet everyone in Kuching and all over Asia. We don’t know if we are nominated yet because the announcement for nominations will be either tonight or tomorrow,” Fazura said when approached.

She also divulged that she had just wrapped up filming ‘Langit Cinta’, which “God willing, would be released in September”.

Meanwhile, Hafizuddin, who acted in films such as ‘Cinta Kolesterol’ and ‘Duyung’, said that he did not know what to expect of Aiffa this year as it was his first time.

“I know that it will be fun – there are lots of seminars that I hope I will be attending and I’m sure I will learn something from this experience. I’m expecting the unexpected,” he said gleefully.

He also divulged that he was in a new movie ‘Pilot Cafe’ which would be premiering here at the Sarawak Cultural Village soon.

An Aiffa representative said a total of 238 delegates arrived yesterday in stages, and they were treated to a flash mob dance courtesy of volunteers from Angkatan Zaman Mansang (Azam) and Universiti Malaysia Sarawak (Unimas).

Earlier on, guests and passengers at the KIA were thrilled by the surprise flash mob to welcome Philippine delegates who also came here for the Aiffa.

The flash mob dancers made up of Aiffa event members captured the hearts of those present with their graceful choreographed skills.

Despite the short appearance of the delegates after their arrival, some members of the public as well as airport guests managed to take some selfies with them.

The delegates are here for Aiffa, of which the Gala Nite and awards will be held at the Borneo Convention Centre Kuching (BCCK) on April 11 when winners for 14 categories will be announced. A total of 60 films had been received for the awards.

The spectacular show ends with the Spirit of Asean Award to be given to the film that portrays the best of Asean.

Another iconic award is the ‘Lifetime Achievement Award’, presented to an Asean film personality who has broken the international barrier. The winner for the award in 2013 was Tan Sri Michelle Yeoh.

More big shot celebrities will be arriving at the city today.

One of them is Datuk Jackie Chan who will be arriving at 8.30pm tonight.

He will meet fans at the Old Courthouse tomorrow after a 20-minute session with the media which starts at 4pm. This will be his only formal public appearance as he intends to spend his visit enjoying the sights, sounds and cuisine of Kuching.