Wednesday, December 1
You are at:Home»Sports»Watersports»Five Sarawak swimmers for SEA Games 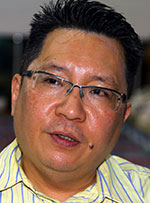 KUCHING: Sarawak will have five swimmers in the national squad for the SEA Games in Singapore this June.

They are Daniel Bego, Vernon Lee, Welson Sim, Erika Kong and Angela Chieng. The good news was received with much pride by the Amateur Swimming Association of Sarawak (Asas).

“We are very proud and happy that the five were selected by Amateur Swimming Association of Malaysia for the SEA Games and congratulations to Welson Sim and Erika Kong who have made the cut for the World Championships in Kazan, Russia,” said Asas president Dato Wee Hong Seng yesterday.

But Wee was also quick to stress the need for more state funding to sustain such achievements.

“All this while, Asas have been striving to develop and produce swimmers for the national squad and we are looking at getting more support from the State government in term of funding,” he added.

Asas have been receiving the same annual grant of RM50,000 for the past 10 years.

“Of course, we must not totally depend on the government for the funding but we have always justified the amount spent on developing the sport in Sarawak.

“At the last Sukma in Perlis last year, our commitment to the government was to contribute eight gold medals but we captured nine,” he pointed out.

Wee, also Kuching Amateur Swimming Association 2010 president, said the government should look into raising the grant for those associations which are doing well.

He said Asas had seven affiliates and they have to be given subsidies to organise local swimming meets such as Datuk Patinggi Tan Sri Dr Wong Soon Kai Inter-Club Challenge Trophy and the Sarawak Age Group Swimming Championship.

And Asas has to spend more than RM10,000 to RM20,000 to send teams to compete in national meets such as the National Age Group Swimming Championship and the Malaysian Open.

“We also need to get foreign coaches to train our athletes and in case that we can’t get one, the government should raise the allowances and salaries for local coaches who are just as good as the foreign coach,” he said.

He hoped for committed volunteers like Hii Hieng Chiong and Anthony Kong be given some sort of recognition by the state government for their contribution to Sarawak swimming.

“Asas is very lucky to have a group of committed people in developing swimming in the state and the parents have also played an important role by helping to source and raise funds for swimming activities,” he concluded.

Four swimmers – Alywin, Angela, Carolyn and Jing En – will be making their debut.