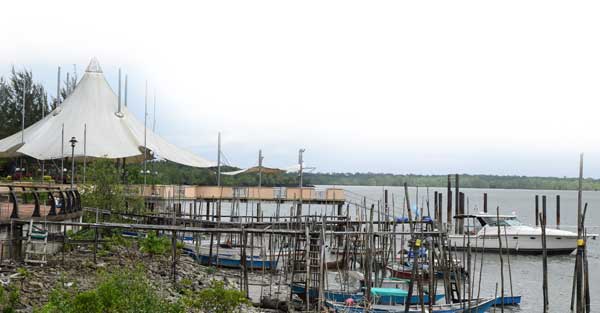 A view towards the sea.

SUNGAI Sibu is a small scenic river flowing through Matang in Kuching.

Meeting the South China Sea with a small little delta and two outlying islands to protect the fishing villages at the river mouth, Sungai Sibu flows by Telaga Air, a quaint and vibrant Malay fishing village about 30km from Kuching City.

In the 1990s, a small homestay was launched in this village with the help of the Malaysian Fisheries Development Board (LKIM) and that made it more significant than just a fishing village.

Today it is more well-known as a neighbouring village to the new home of former Head of State Tun Datuk Patinggi Abang Muhammad Salahuddin Abang Barieng.

Ever since the end of the last century — just 15 years ago — many people have chosen Telaga Air as their destination for fishing safaris, homestays, sports fishing with customised programmes, and half-day picnics and adventures.

Now there are many homestays to choose from.

Anette Kjaer Joergevsen, a former journalist from Denmark, was so impressed by the people of Telaga Air and the pleasant climate that she has been thinking of making her stay longer by renting a kampung house for five or six months.

Fish come fresh from the sea and are carried onto jetties owned by the local fishermen, and properly secured for safety so that children will not wander out to the platforms and fall into the water.

At low tide, the fishing boats land at the big sturdy concrete jetty constructed by the government. Fish are sold at the council-built wet market or at individual stalls put up by the fishermen themselves to sell to their fellow villagers and visitors from around Kuching, Matang and Padawan.

The prawns are also fresh and very popular. With prices up to RM35 per kg for thumb-sized fresh prawns, the fishermen do not have many problems selling them before the morning is over. 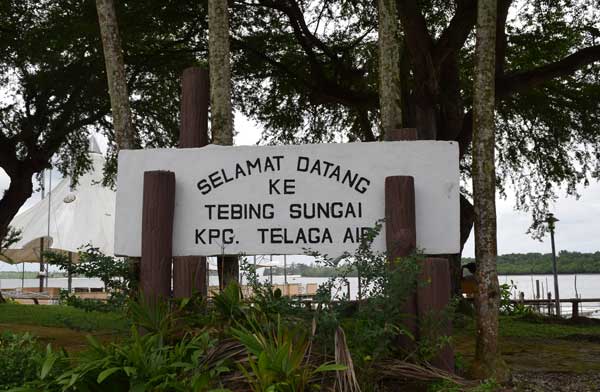 According to one fisherman, people from Kuching come in their cars in the morning and drive home before lunch with RM50 to RM100 of fish and prawns each on a good day.

Often a husband and wife or even a whole family will stop for a coffee break — which makes the locals very happy. This signifies a good future for them.

The eateries, offering fresh prawn noodles, mee jawa cooked with the best ingredients and other seafood dishes attract many visitors from Kuching, especially in the evening.

Locally-baked biscuits like kuih sepit or love letters are sold in the shops. Dried fish and salted fish packed in plastic bags and fresh vegetables, especially chillies, are aplenty.

“Many people come here to view the sunset and also walk around. The Telaga Air esplanade is very pretty and the people very friendly,” said Kak Mah who lives in the village.

Smiling through betel-nut coloured teeth, she said she is extremely happy with the development in the village over the past 10 years.

“The people are very happy we now have better roads and infrastructure. We have many visitors from Kuching, and from as far as Lundu and Sri Aman. I’m happy here with my family. My grandchildren are also attending good schools nearby,” she said. 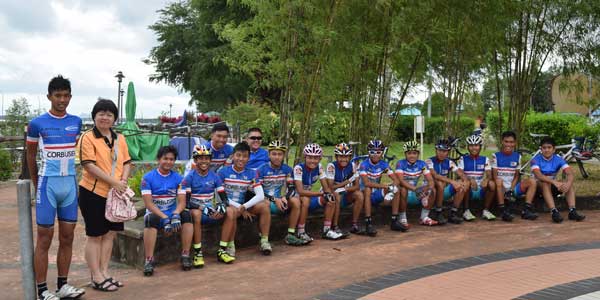 (From left) Daniel and Chang with the rising cycling stars.

Taking a break at the esplanade was a group of young cyclists, well outfitted with Corbusier suits, proper cycling shoes and even branded racing bikes. They belong to the Sarawak Young Cycling — or Corbusier — Team.

Team manager Safri Mohammed from PU Architects, explained: “Each time the lads look at the name — Corbusier — printed on the front of their racing suits, they will be reminded of the great architect, a role model I have told them about — Charles-Édouard Jeanneret-Gris, better known as Le Corbusier.”

Le Corbusier was a Swiss-French architect, designer, painter, urban planner, writer and one of the pioneers of what is now called modern architecture — all rolled into one.

He was born in Switzerland and became a French citizen in 1930. His career spanned five decades with the buildings he designed dotting the landscapes of Europe, India and America.

“These boys know about Corbusier and they are aiming to become someone with a significant future through the help of mentors, teachers and training programmes like the ones we are doing during the holidays,” said Safri, an architect by profession.

full confidence that his young charges will strive hard to be the best.

Safri chipped in: “Most of them came to us with zero knowledge about cycling. But after a while, they started to cycle like pros.”

Citing the example of Danial Syafiq Saiful, the team manager said this student from SMK Tabuan Jaya could not even cycle at first but he progressed to become a pro in a short time.

“Now, the talented cyclist rides tall and has actually just returned from Langkawi where he placed fifth in Malaysia’s Tour de Langkawi.  He is considered one of the top 10 national young cyclists — someone to be reckoned with in the sport.”

Next month, after the training camp, the young cyclists of Team Corbusier will be going to Indonesia for another competition. 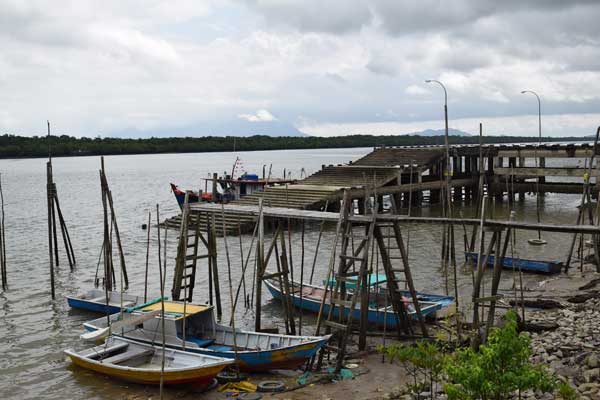 Danial was very happy to see his teacher Chang who had come for a bit of sightseeing at Telaga Air.

He immediately went over to shake hands with his teacher who had just alighted from her car at the esplanade. It was so polite of him to do so. Later, the whole group took a photo together with the teacher.

Danial is very tall for his age and will sit for his Sijil Pelajaran Malaysia (SPM) next year. His exposure to the world of cycling has helped him mature and become more wholesome as a young person.

The Team Corbusier members have been well outfitted by sponsors. Some of them do not have to spend their families’ money. In fact, a few come for training with just two bottles of drinking water. Most have been selected through stringent assessment. The best of the young cyclists, regardless of race, religion and status, are in the team to represent Sarawak.

The roads in Matang and Kuching are “very safe” for riding, according to Safri who is happy that cycling has become one of the top hobbies and competitive sports as well as a popular form of exercise in the state. 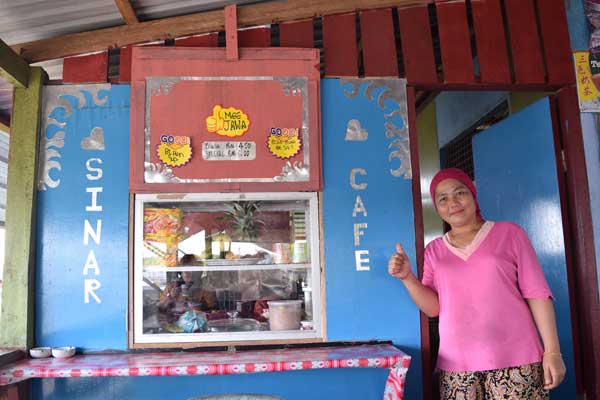 The fish stall owners of the Telaga Air wet market are pleasant and friendly. Their prices are reasonable and their fish definitely very fresh off the boat.

A fisherman’s wife, who declined to be named, said she made cincaluk (fermented krill) and belacan (prawn paste) over the past few weeks, apart from selling biscuits at the shops.

She felt that with more people coming to Telaga Air, more products must be made available to them.

“We have fresh coconuts, fresh fish and also many types of fruits. All these can help us make a living. Even though the income may not be regular, we can all help each other, and at the beginning of the year, with our accumulated incomes, we can all look forward to celebrating a happy Hari Raya Aidilfitri.”

The Telaga Air hinterland offers great attractions for both local and foreign tourists.

These include a bee farm, agriculture and mushroom farms, the Red Bridge picnic area and a special lemang house, among others.

The Padawan Municipal Council (MPP) looks after Telaga Air and has been organising the Telaga Air Festival at the end of the year since the early 1990s. This is one festival where people are encouraged to attend and help put the village on the tourism world map.

One visit to Telaga Air seems hardly enough. Many will return — again and again — either to watch the fishing boats sailing from the sea into Sungai Sibu Laut or the lovely sunset.

And hopefully in time to come, some restaurants can offer the best of seafood at this idyllic locale.

A view from the jetty of an eatery at Kampung Telaga Air.