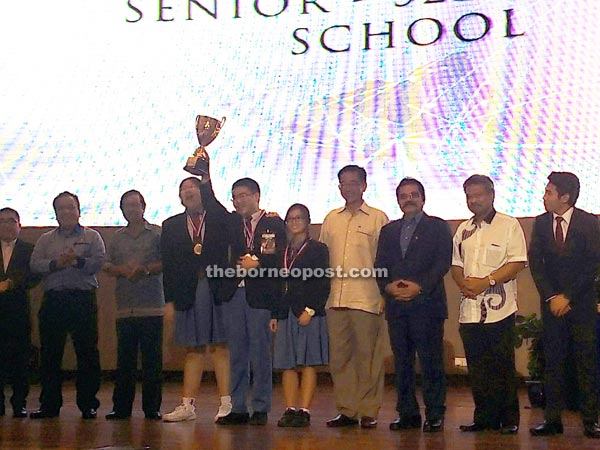 Abdul Karim (fourth right) celebrating with members of the Lodge School teams, who were crowned overall champions of both junior and senior categories at the National Academic Decathlon.

KOTA SAMARAHAN: Sarawak children can compete not only with those from Sabah and the Peninsula but also those from other nations.

“It will teach them a whole range of skills such as those in communications, critical thinking, leadership and teamwork. Most importantly, it brings accessibility to every student of the nation to not only compete locally, but also internationally,” he said when closing the National Academic Decathlon held at DeTar Putra, Universiti Malaysia Sarawak (Unimas) here recently.

Adenan’s speech was read by Assistant Minister of Youth Development Datuk Abdul Karim Rahman Hamzah, who represented the chief minister at the ceremony.

The academic decathlon was divided into five categories – Debate Challenge, Public Speaking, Brain Challenge, Writing Challenge and Group Challenge – with each further split into the junior and senior segments.

Meanwhile, the Senior Brain Challenge winner was Team 531 from Lodge School, with Team 520 from Lodge School and Team 550 from SMK Kuching High getting the second and third spot on the podium, respectively.

Overall Junior champion was Team 114 from Lodge School, while Team 522 also from the same school was named the best in the senior category.