Tuesday, January 21
You are at:Home»News»Sarawak»Researcher: Almost half of 6,000 world languages risk becoming extinct 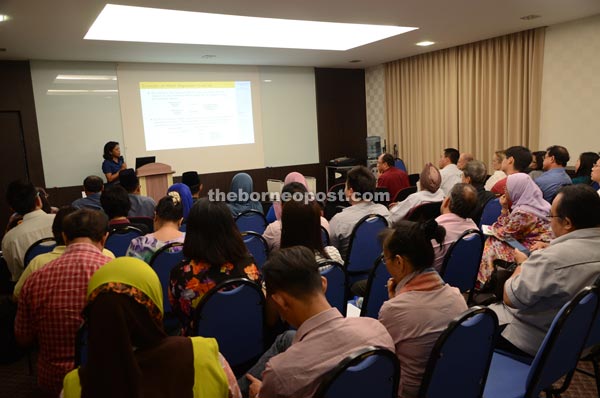 Participants of the seminar paying attention to Malancon’s delivery on the preservation of Sarawak languages.

KUCHING: It is estimated that at least 43 per cent of some 6,000 languages spoken across the globe have been listed as ‘endangered’.

This was highlighted during a public talk on ‘Preserving Sarawak Languages and History through Language Processing’ delivered by an associate professor from Universiti Malaysia Sarawak (Unimas)’s Faculty of Computer Science and Information Technology, Dr Balisomanandray Ranaivo Malancon at Azam Complex here yesterday.

The professor, who leads the Sarawak Language Technology (SaLT), also stated that United Nations Educational, Scientific and Cultural Organisation (Unesco) had determined 25 endangered languages in Malaysia – five of them in Borneo.

Malancon said the languages of Lelak and Seru in Sarawak had been deemed extinct as they no longer had any speaker.

“Another Sarawak language highlighted (by Unesco) as being ‘critically endangered’ are the languages of Punan Batu with only 30 known speakers left, while Sian is classified as ‘severely endangered’ with only 50 speakers and Kanowit identified as a ‘severe’ case with 100 speakers.

“In Sabah, the language of Abai Sungai has been classified as ‘definite endangered’ with 400 speakers,” she said.

On Sarawak’s endangered languages, Malancon said the challenge for SaLT at Unimas was on the status of the survival of these languages as they needed long-term involvement from the community.

“We need help in our research; more respondents and researches as well as support from students and institutions.

“On the top of it, SaLT needs financial support to collect more data, as well as to improve and develop language tools so as to maintain all these languages for future generations,” she stressed.

Malancon hoped that with the research conducted at Unimas together with the technology in place, they would not lose any more languages in Sarawak.

On SaLT, she said it began as a research group back in 2006, aimed at revitalising and maintaining the state’s culture and heritage through the use of information and communications technology (ICT).

“Its ultimate objective is to create a sustainable repository for all these acquired Sarawak languages, as well as their historical aspect.

The one-hour session included a brief introduction about SaLT and its research on the speech synthetiser for Sarawak Malay, as well as a morphological analyser for the Iban language and ways to use ‘Sarawak Gazette’ – the oldest newspaper published in Sarawak.