Saturday, December 3
You are at:Home»Columns»How I See it»Reformist Chief Minister? 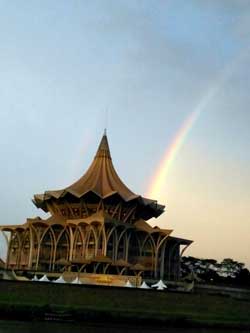 Somewhere over the rainbow, skies are blue, and the dreams that you dare to dream really do come true.

“I AM so sorry about this. But I must file this private member’s motion to discuss a definite matter of urgent public importance.” I had to run into the Secretariat of the State Assembly because the clock in Dr Andrew’s car showed 4.18pm when we arrived at the majestic legislative building.

“Ah … don’t worry, there is still time. We will be working late again today. Let me get it acknowledged at the administrative department,” said a staff member in the Secretariat. The staff may have been amused with the elected representative running in with his slippers but they offered customary courteous smiles.

“The motion is under Standing Order 15, YB?”  Yes, the Secretariat staff are knowledgeable and can always guide the elected representatives through the labyrinth of Standing Orders.

The Speaker has certainly taught them well. The DUN building was abuzz with activity this month, for the first time, because the legislative assembly is sitting next week. To have a State Assembly sitting in April is a first, as far as the staff can recall. The sittings have always been in May and November each year.

Though this sitting is a month earlier than usual, there is no shortage of questions, motions and bills to be tabled for the deliberation of the legislators, I was told.

Speculation started in January, when a reporter overheard whisperings in the corridors of power that the State Assembly would likely be convened in April.

Some suggested this was surely to pave the way for the state election immediately after the sitting. The visit of the Prime Minister during Chinese New Year certainly sparked the imagination of many opinion leaders both in and out of the coffeeshops.

The hype of state election gossip has calmed down because there have been no new leads. There seems to be no solution to the internal squabbles within the political camps. The Chief Minister has remained calm and laid back, despite the heightened media spotlight trained on his movements. With nothing confirmed by the astute Speaker nor the cabinet ministers, speculation about an early state election was overtaken by the flurry of debates on GST, 1MDB, Hudud and a Prime Minister in crisis.

We just have to take a break from looking across the South China Sea, though we are not spared the rot. No thanks to the fateful bad company.

I prefer to look at the sunny side of things, as always. It certainly doesn’t seem helpful in life to keep looking at any other side. As most doctors would advise: “Be positive, it can lower stress and anxiety and be good for our health and well-being.” I believe that.

I am certainly happy with this State Assembly session in April. It means we can, and most likely will, have three sittings this year. The State Constitution requires that the legislative assembly convenes within six months from the last sitting, so it is not possible to have the next one in November.

“CM suggested that we have three sittings this year, and four sittings in the following years,” said my friendly adversary in the other camp, who was trying to impress me with the new state administration breathing the air of ‘Reformasi’ too.

Hmm … not only is the CM taking up issues championed by the opposition, he is interested in the bigger agenda too.

To have more sittings for the legislative assembly is certainly welcome. It means that the people will be better served.

Over the last four years, I have noticed that each of the eight sittings saw the elected representatives submitting more than 300 questions affecting the state and the people to the various ministries. Excluding some questions that may be repeated, there must have been more than 2,000 questions raised.

For the more than 200 questions submitted at each sitting requesting oral answers, three quarters of them may have lapsed due to the time constraints (certainly an area for improvement). However, the questions should alert the ministries to address the matters raised, whether or not answers were given in the State Assembly.

With more sittings each year, it would mean more of the people’s plight would be raised and deliberated by the legislative assembly.

Further, with shorter intervals in between the sittings, issues affecting the people and the state would be tackled more speedily.

However, the roles of elected representatives under parliamentary democracy are not just limited to raising issues affecting their constituents, attending debates and voting on the motions and laws.

The Westminster model of parliamentary democracy that we have inherited requires elected representatives to be members of committees of the legislative assembly and to play crucial roles in looking into government policy and the work of the executive branch of government, in ministries, departments and agencies, etc to oversee and query the implementation of policy and works so that issues are tackled in detail, and the state and the people’s interests are better served.

The principle of public accountability and transparency would have been better served with informed officers from the State Financial Secretary’s office and the chairman of Sacofa appearing before a committee overseeing the Ministry of Public Utilities and providing detailed explanations on the proposed disposal of the state-owned company, rather than leaving it to the Chief Minister and the Minister of Public Utilities to answer queries of which they may have little or no personal knowledge.

Similarly, implementing bodies and agencies of basic infrastructure amenities in the state would have given the committee of our legislative assembly a report with a clearer picture of the delay and neglect in the provision of needed basic amenities in rural Sarawak.

It is ironic, as an elected legislator, to say that the Malaysian Parliament and the state legislative assemblies have remained rather stagnant. In fact, legislative supremacy has been much eroded.

Elsewhere, legislative assemblies have and are undergoing reform and rejuvenation to institute transformation to assert legislative supremacy and ensure that they play a crucial role in the government.

With a reformist chief executive officer helming the state administration, aided by an experienced Speaker, it gives us hope that the State Assembly may be transformed towards excellence and then emulated by the other state assemblies in Malaysia.

Anyway, this is the wishful thought of an elected representative, thinking positively.

Will the State Assembly sit for three times this year?

How far will the reformist CM go to bring the change that Sarawak needs?