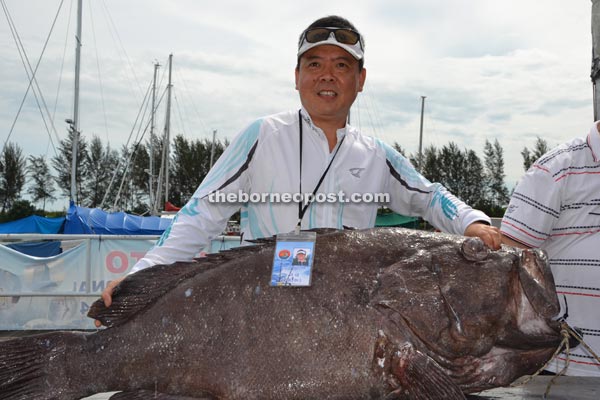 Fu Yi Qi, a delegate from China, won the ultimate prize when he caught a giant grouper weighing 57.62kg in last year’s tournament.

MIRI: For the ninth consecutive year, the Miri City International Deep Sea Fishing Tournament is here again and this year it will be held from April 23 to 26.

Organised by Miri Anglers Club, the much anticipated event will be held at Luconia shoals, some 80 to 140 nautical miles from here.

According to Miri Anglers Club president, Yee Chung Chai, the event is expecting a total of 134 participants from 11 countries including Malaysia, Brunei, China, Britain, Australia, Norway, India and Singapore.

“Since its inauguration in 2007, this year will be seeing a bigger tournament with hundreds of participants and a dozen of boats involved. Of course, the challenges would be tougher,” he said.

Yee also revealed that a total of RM51,700 in cash prizes were up for grabs, including 25 prizes for three categories – Individual, Team and Fish Species.

Mayor Lawrence Lai will officiate at the flag-off ceremony on April 23 at 10am, while the prize presentation, which will be held at Meritz Hotel on April 26 at 6.30pm onwards, to be graced by Assistant Minister of Sports Datuk Lee Kim Shin.