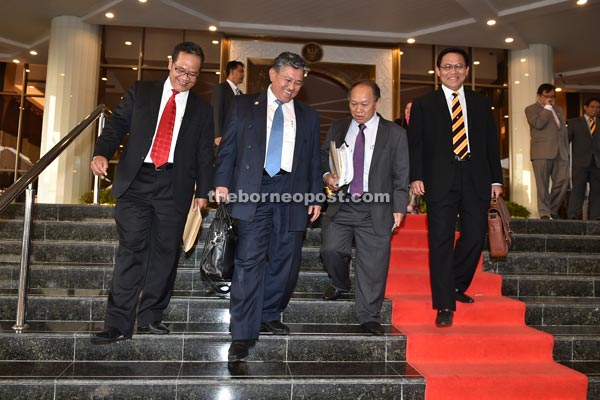 KUCHING: The State Legislative Assembly (DUN) yesterday passed the Forest Bill 2015 after 20 elected representatives, including the opposition, participated in the debate.

During the third reading of the Bill after the break and before the Bill was passed, Awang Tengah said the Bill was to enhance the state’s forest conservation effort by empowering forest officers and increasing penalty for forest offences.

He also called on the opposition to join the force, and regretted that some opposition members did not support the Bill in the debate speech.

“The Forests Bill 2015 is a clear manifestation of the state government’s resolute commitment to strengthen the state’s forest management and taking into account the environment and welfare of the local community,” he told the august house in his winding-up speech.

On the concentration of powers on the Minister and the Director with regard to the issuance and renewal of forest licence and the making of rules under the new Ordinance, Awang Tengah said the Bill proposed that the Director of Forests should primarily be responsible for the administration and enforcement of the provisions of the new law, but has to give effect to the directions from the Minister who is accountable to the august house.

“Ultimately, this Dewan, its Public Accounts Committee and the Auditor General have oversight over how the powers conferred by the new law on the Director and Minister are exercised,” he said. He emphasised that the state government had always taken action to combat illegal logging, which he described as a menace.

“The government will intensify its effort to eliminate illegal logging and trade in illegal timber to safeguard the sustainability of the timber industry, both in the upstream and downstream,” he pointed out. On the seized logs handed over and sold to Harwood Timber Sdn Bhd, he said this was to ensure that the logs would not be obtained through devious methods by those involved in illegal activities.

He added that Harwood, which is wholly owned by Sarawak Timber Industry Development Corporation (STIDC), will no longer invite tender for seized logs, while proceeds from the disposal of seized logs would eventually be directly or indirectly channelled to the state government through STIDC.

According to him, 46,216 cubic metres of logs with a royalty value of RM3,004,040 and estimated market value of RM13.9 million were seized from Jan to Dec last year.

Out of that, 23,173 cubic metres had been handed over to Harwood, while 492 cubic metres from the balance of 23,043 cubic metres were destroyed as they were found in remote areas or of poor quality and low commercial value.

Further 13,273 cubic metres were returned after cases relating to forestry management offences had been compounded, he said, adding that the compound fees during the period totalled RM2.4 million.

Another 9, 278 cubic metres were still under investigation, he said.

The Minister of Public Utilities and Minister of Industrial Development also told the august house that the government had established a taskforce on illegal logging, with members comprising the police, MACC, MMEA, Customs Department, major timber licensees and Sarawak Timber Association.

He explained that the taskforce has the responsibility to draw up measures to further strengthen efforts to combat illegal logging and other illegal activities.

Additionally, all licensees are held responsible for the activities of their contractors, workers and agents and required to sign corporate integrity pledge.