Saturday, August 15
You are at:Home»News»Sarawak»The Australian and Borneo Connection at Anzac Day 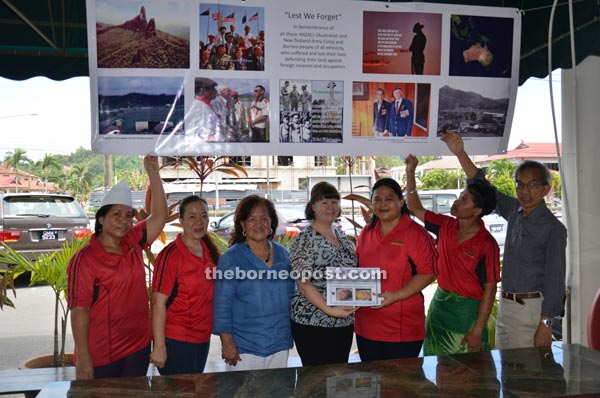 Dr Roland (right) proudly shows the banner with pictures of the recent 70th anniversary of the landing of the Allied forces in Bario, while Sheryl (centre) and a staffer of Canopy Café hold a picture of Anzac Biscuit and Kelabit Urum.

MIRI: Anzac Day on April 25, which is often observed in a big scale in Australia and New Zealand, will also be observed in here.

The anniversary is to commemorate the first major military action fought by Australian and New Zealand forces during the First World War.

According to the coordinator of the celebration in Miri, Dr Roland Dom Mattu, this year is the 100th anniversary of the Gallipoli campaign in Turkey.

“The day is to remember those who fought for the freedom of others living in less fortunate circumstances. As a Sarawakian, I salute the Australians on this special celebration.

“Australians don’t glorify war; they don’t celebrate Anzac day. It is a sad day in remembrance of those who fought and died for the Allied countries. It is also a time to reflect on the miseries of wars and appreciate peace,” he told The Borneo Post recently.

Roland said among those who died in the war was his wife Sheryl’s great-uncle Private Wilmot Ernest West, of Westbury, Tasmania (died in the First World War (1914-1918). On 7 June 1917 he was killed in action in France at age 22. He has no known grave but his name is recorded on the The Ypres (Menin Gate) Memorial, Belgium.

“Sheryl’s godfather CT Robbie Robinson was a British Supermarine Spitfire single-seat fighter aircraft pilot for the Royal Air Force and Allied countries during and after the Second World War (1941-1945).

“He was shot down over Burma but survived. After the war he came to Lawas and flew the mission planes, often on medical flights throughout northern Sarawak. His local name was Daring and his wife Margarets’ local name was Renai,” he revealed.

Records also show that 1,609 Australian and New Zealand soldiers died in Malaysia fighting for Malaysia during World War 2 and during the Confrontation.

Roland also reminded Sarawakians to remember the secret war of the Highland Guerrillas in the heart of Borneo. The Australian Services Reconnaissance sent the Z Special Unit to be airdropped onto Bario in the Kelabit Plateau in the Upper Baram to fight behind enemy lines (during Japanese Occupation) in 1945.

“For our freedom and peace of today, we must remember the sacrifice of the Indigenous people who fought with the Allied forces. Young generations should know the real history,” said Roland.

He said on Anzac Day (Saturday, April 25), special food will be served at Canopy Café. The proceeds from the sales of Anzac biscuits or Kelabit Urum plus tea and coffee will go to charity.

Canopy Café is a fusion of Australian and Dayak-style cooking by experienced Muslim cook. Lunch time Canopy Café will be serving lamb, roast vegetables and other local favourites. All are welcome.

Anzac biscuits were given to the Australian and New Zealand Army Corp when they went overseas to help other countries. In the present time, Australian mums make these biscuits for Anzac day to teach their children to remember those who gave their lives fighting for freedom and democracy for other countries.