Wednesday, December 7
You are at:Home»News»Sarawak»SHS, architects back CM in preserving forts as heritage 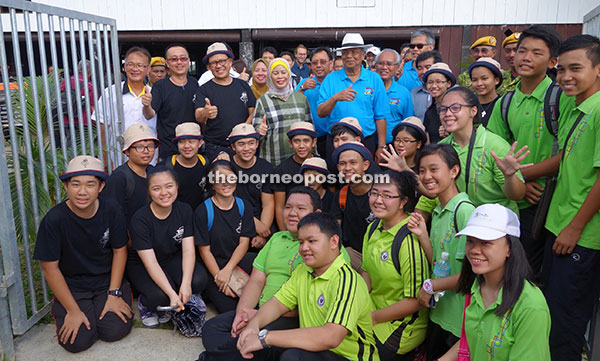 Adenan (standing centre, white hat), Jamilah and others in a photo call with Sri Aman students involved in the community engagement programme. 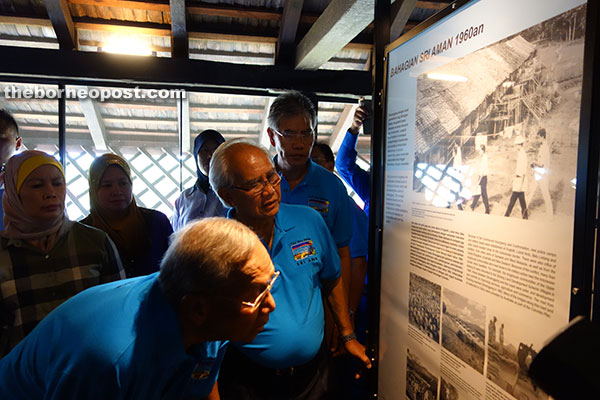 Adenan verifies facts on a display in Fort Alice which has undergone restoration. At his left is Deputy Chief Minister Datuk Patinggi Tan Sri Alfred Jabu.

Adenan announced this during the opening of the newly-restored Fort Alice in Sri Aman recently.

His call supported his speech at the Sarawak Tourism Federation (STF) Tourism Forum earlier this month where he stated that the unique features of the state’s history, including the rule of the White Rajah, are of great interest to visitors.

Both non-governmental organisations (NGOs) said they strongly believe that the series of forts are part of a narrative that would delight tourists and be a definitive step forward in any drive for United Nations Educational, Scientific and Cultural Organisation (Unesco) World Heritage listing.

“Many of the forts have been demolished or even have fallen into the river. We thank the Chief Minister for his support in this pursuit to preserve our cultural heritage for future generations before they are totally forgotten,” PAMSC chairman and conservation architect Mike Boon told thesundaypost.

He said out of the 30 forts built across Sarawak, stretching from Lundu to Lawas, only 14 remain in different stages of dilapidation.

Even Fort Alice had fallen into serious disrepair before the RM5 million project under the Sarawak Museum Department to restore it to its former glory.

“The schoolchildren of Sri Aman who were involved in the community engagement programme alongside the project have had the greatest possible finale to this 18-month series of events. The Chief Minister and his wife, along with his senior ministers all took time to acknowledge their efforts in learning about the fort’s conservation and even took a group photograph. This will stay with them for the rest of their lives and cement a love of their heritage for future generations,” said Boon.

SHS president Karen Shepherd said both NGOs would help the department to prepare a plan for the conservation of the forts.

“As NGOs, we have been campaigning for a multi-stakeholder approach to heritage conservation in the state. We will do anything within our resources and expertise to help push forward this initiative.

“We would like to propose that our NGOs embark on a new project in Kuching to physically conserve a heritage building and, at the same time, run a third instalment in this successful community engagement series for our state’s capital. We will consult with the museum to identify an appropriate site for physical conservation and call for more like-minded NGOs and corporations to step forward to support our next undertaking.”

Both NGOs commended the relevant ministries in their first steps to set up a Heritage Council to oversee such matters and hope this would soon result in a heritage unit staffed with knowledgeable personnel who can develop a conservation management plan.

The community engagement programme, part of the Reminiscing Forgotten Treasures series started in Siniawan by PAMSC, SHS and other NGOs, has been a very successful model of how to energise the community behind heritage sites, enhancing their significance as examples of living heritage.

The model has demonstrated what can be achieved by links between NGOs and corporate sponsors, such as NS Bluescope Lysaght (Sarawak) Sdn Bhd.