Tuesday, July 14
You are at:Home»News»Sarawak»Preserving heritage of Limbang Malays through festivities 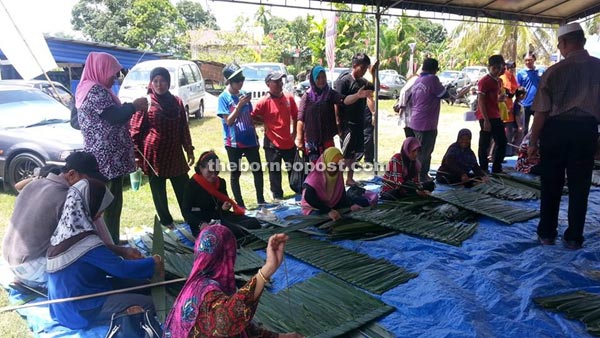 The Malay community of Limbang demonstrating their atap weaving skills with Rumbia leaves.

LIMBANG: The rich heritage of Limbang Malays continues through Pesta Berdudun and buffalo racing competitions in the region, courtesy of the Limbang Malay Association.

At the forefront of preserving cultural heritage, the association is organising these events for the second time in Kampung Meritam to showcase the heritage of culture, sports and food associated with the community.

Association chairman Mohamad Abu Bakar said the theme for this year is ‘Towards Self-Empowerment and Malay Unity through Culture, Customs and Courtesy’.

He said this theme was chosen due to its significance to the Malay community at large, where erosion of culture and courtesy has eaten into their social fabric with the onset of technological advancement that impacted communication and interaction.

“This is most significant as there are many who have a dim view of our culture and many among us Malays who are discarding the traditional customs and culture in their daily life with the passage of time,” he said.

According to him, 29 Malay villages in Limbang District would be participating in the festival, which includes a kelupis making competition as one of its events.

Kelupis is a popular local delicacy which is a mainstay of food served during festivities.

Limbang’s kelupis is unique as it is wrapped with ‘nyirik’ leafs, compared to glutinous rice wrapped with ‘palas’ leafs in other parts of the state.

The organising committee has also lined up a tug-of-war, sepak takraw, attap roof weaving, swordsmithing and buffalo racing competitions to be held during the festival.

Cultural stage shows will also be one of the highlights of the festival.